Narcissist is the companion game to the compelling but unplayable Continuum, slated for a 2008 release but so far yet to see anything beyond the 0.7 testing release.

In this post I’ll do a couple of things. First, I’ll look at Narcissist as the counterpoint to Continuum (which I’ll revisit, natch). Second, I’ll discuss the playability of both games. The second point is important because I’ve always considered Continuum unplayable due to the arcane Time Combat and punitive book-keeping. Is that true?

I have a thing for dead games. On the other hand Continuum and Narcissist are only dead in leveller terms. Their death is in both games Yet, but maybe they can still do great things. 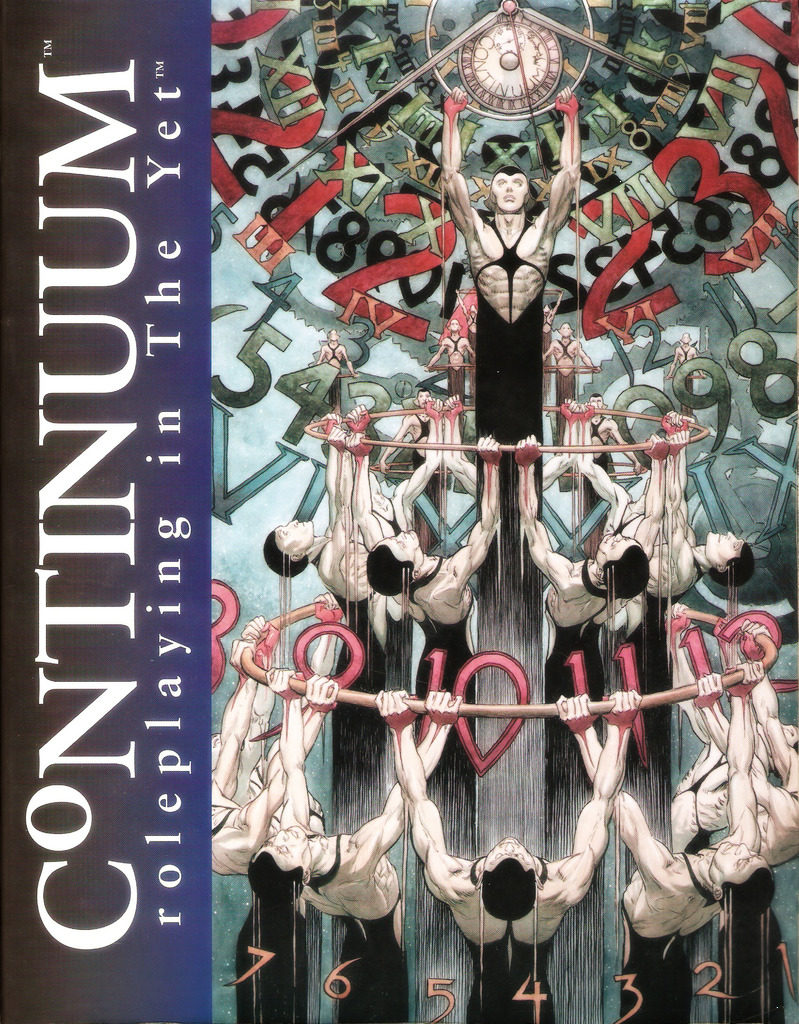 The Wikipedia page has an extensive write-up of Continuum, although it misses a couple of key points. These are the highlights.

Spanners are time travellers. Their ability to travel is measured in Span, which is counted in fractions up to one and then whole numbers after that. The Spanner rank determines how far you can go in both time and space between resting (ranging from seconds and inches to many thousands of years and miles). Spanner rank is taught, based on merit; and the ability to span is technological (nanotech to be exact), not magical. Spanners actually make use of the “sky road” aka the Van Allen belt.

There are three imporant eras in the setting, from 18000 BC up to 2400 AD. At the start there’s the Antedesertium, the origin of the narcissists, the self-serving enemy time travellers who oppose the Continuum. At the end there’s the spacefaring Inheritors, an inevitable future society of time travellers who no longer have to use the Sky Road. In between there’s the human Societies stretching for 20,000 years or so. 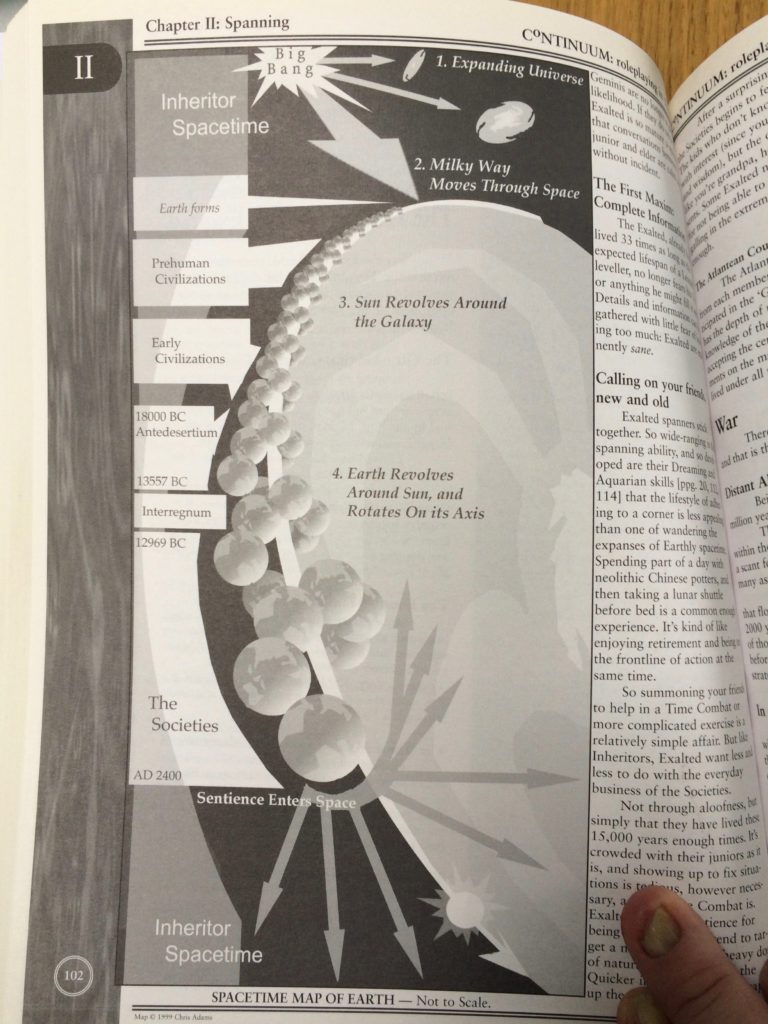 The Continuum is all about preserving the timeline. Alternate timelines are fallacious and heretical, as are parallel universes. The Continuum has a set of maxims which must be obeyed, including trusting your elders (they know more than you) and the limits of how much you can help a paradoxical situation. 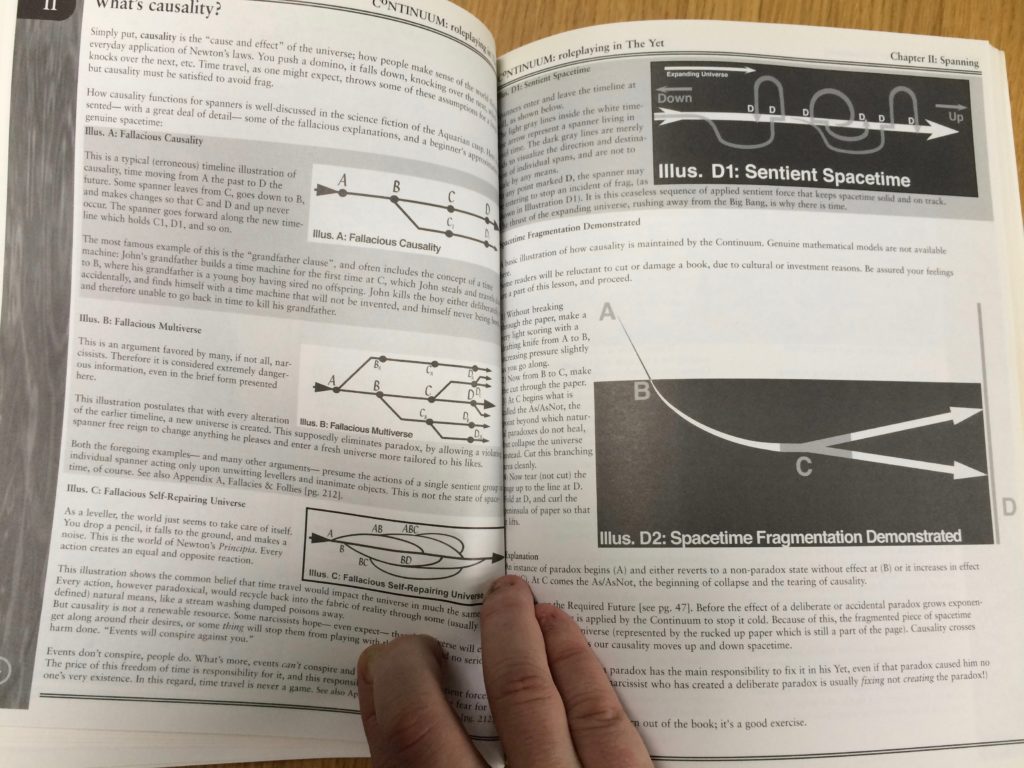 Speaking of paradox, frag is a measure of paradox and is applied personally to spanners, and it’s their job to deal with it.

Information is everything. What you actually know is really important, partly because of your personal Yet. Everything is technically fated to happen, but you can’t know what will happen if you haven’t observed the outcome. There are little rules here and there about what happens when you meet yourself (a gemini incident) and what happens if you skirt around your own death and then get killed a second time. But most importantly the rulebook is laid out according to Span, as though the player characters were progressing up the hierarchy. Crucially behaviours change as your span goes up. You age differently; you join Fraternities (Traditions, Bloodlines, etc.); you participate in the Greatest Game. Most importantly your spin on what the Maxims actually mean and tell you to do changes as you go up the ladder and learn more about spanning, becoming responsible for lower ranks beneath you.

The book is rounded off with accounts of the war between the Antedesertium and the Continuum over the zodiacal ages. But make no mistake, the outcome of the war is a foregone conclusion. The Continuum dogma does not allow for any future except the ones where the Inheritors succeed the Societies. The Inheritors at the end of time are thoroughly invested in that outcome, and they exceed the Span of any in the Continuum; therefore they will always ensure paradox is corrected and the timeline stays on track. 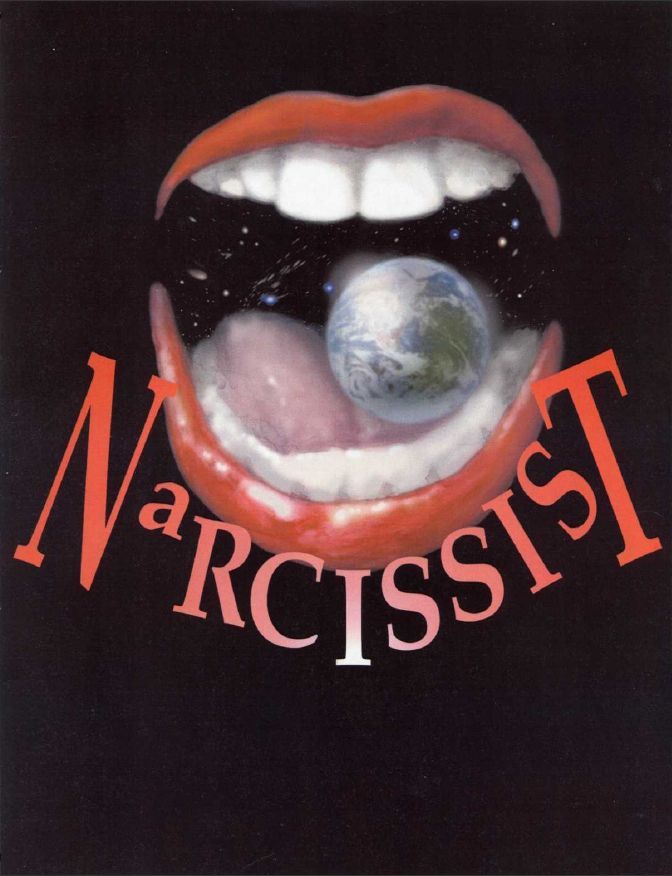 Narcissist makes sense — and is a lot of fun to read — as a direct counterpoint to Continuum.

Being the same “Dreamcatcher” system it has a lot in common with Continuum — some parts of that book have been re-used (skills, leveller combat) and others have been tweaked ever so slightly to work from the “crasher” POV. So, here are the highlights:

So, basically, you have the same game, but perfectly inverted. One side relies on a philosophy of convergence to a singularity far in the future; the other side relies on the root of many branching paraverses deep in the past. But even though the philosophy of how time travel is achieved differs, the underlying mechanism — that of spanning, and Time Combat — is the same.

There is something beautiful about how Narcissist handles time travel, however. First of all low-level crashers are built by infecting them with stolen nanotech from the other side (specifically the Fraternity of Physicians). Second, they travel in time via the Royal Road by hopping to different paraverses.

In this game different paraverses are rated for Proximity (to where you are now), Thrust (scale, energy, mass, size) and Drift. It’s Drift that determines how fast time runs relative to your current paraverse; so to travel in time all you need to do is hop onto a faster drifting paraverse, then hop back and hey presto, you’re in the future. The Royal Road includes cascades of paraverses with graduated drift that can be used to make precise jumps.

(It reminded me a lot of Nine Princes in Amber). 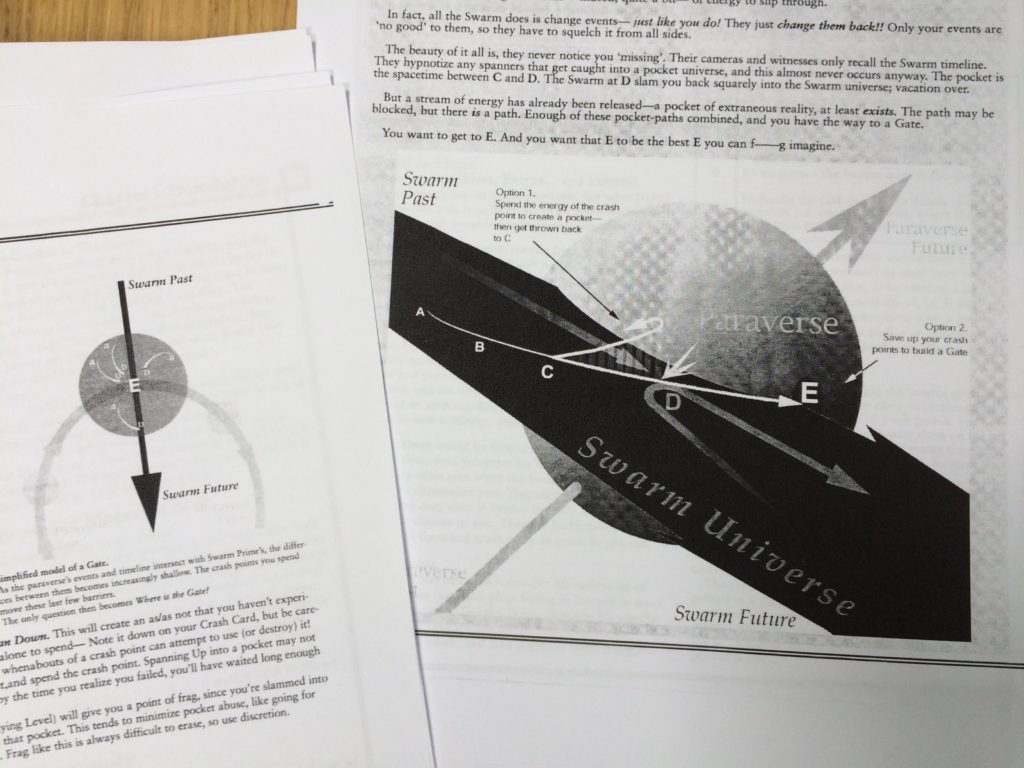 Another cute twist that Narcissist makes is the treatment of doubles or Gemini. The Continuum’s maxim of “trust your elders, they know more than you” applies to versions of oneself (elder Gemini). This is inverted by crashers, for whom elders you cannot remember are inherently untrustworthy, since they could be echoes or other Continuum tricks, or a corrupted older self. Disbelief protects against this. Not only that, crashers have a mercenary approach to their own doubles from other paraverses, being prepared to murder them to fake their own death in another paraverse, steal their lives and resources, and so on. Of course the Continuum’s dogma means this philosophical point isn’t really a concern.

At first sight the problem with Continuum is the sheer amount of book-keeping needed. Each player maintains a span card detailing their spanner’s every jump backwards and forwards.

Actually I think that’s fixable. Find a way to simplify recording the jumps, accumulating tokens, tracking locations and the number of visits each PC has made to them. Consider how complicated the combat is in Burning Wheel but then how easily it can be simplified by just laying down the moves on cards — which I believe is just what Mouse Guard does. You could do exactly the same with Time Combat moves and make it much easier to see what’s happening.

Narcissist seems much more playable than Continuum simply because it’s more interesting to be the underdog and the outcast fighting the system; but structurally it’s identical. Whereas Continuum’s Span 1 spanners start out in a Corner working for a Span 3 or whatever fixing things, Narcissist’s low-level Crashers will be working for their Artisan and later other higher ups from the Merchant and Warrior castes making crash points and new gates. I don’t see much of a difference.

The question is, why should they bother if their philosophy says their version of the timeline is inevitable? What are they actually doing? For both sides it sounds like pointless busywork to me.

Continuum notably has an “Appendix A” which is a list of all the things the game is not. It’s not about policing the timeline. It’s not about the mortals left behind. It’s not about the loneliness of being a time-traveller. It’s also not about a self-repairing universe or “chronos ex machina”. I’m struggling to work out what the game authors actually think the core activity is, aside from engaging in Time Combat all the time.

What would be playable, and interesting to play, would be a game where the characters live on the fringes of one side doing its dirty work, and are forced to make compromises and accept the philosophy of the other side to get things done.

I drafted a game called Transuranic World a while ago (and playtested it a couple of times). This was basically Sapphire and Steel as a PbtA game. It never went anywhere; but re-reading Continuum and Narcissist has made me realise what was missing — the philosophy, the high concept and the overarching vision of the timeline. It was fine when the time agents Sapphire and Steel only hinted at their true philosophy and motivation, but roleplaying games need more, I feel. This may just be it.

Continuum and Narcissist are masterpieces of worldbuilding, but as games they’re no good. But out of two difficult games there’s one game with a great deal of potential. This is what I would change:

That’s what I would do, and what I may do if I ever come back to Transuranic World. I’m currently suppressing the ideas and trying to finish old projects rather than start new ones.

If these books ever see print again they should be as tête-bêche bindings with the final chapters in each comprising the timelines, converging on their mutually-exclusive zeniths.