Did this come before or after Threefold theory? Certainly they were adopted by GNS theory but seemingly as mutually exclusive goals.

But that’s not what Everway’s system did. Not only was the GM free to use whichever method of resolution suited them at the time, these methods form a continuity. 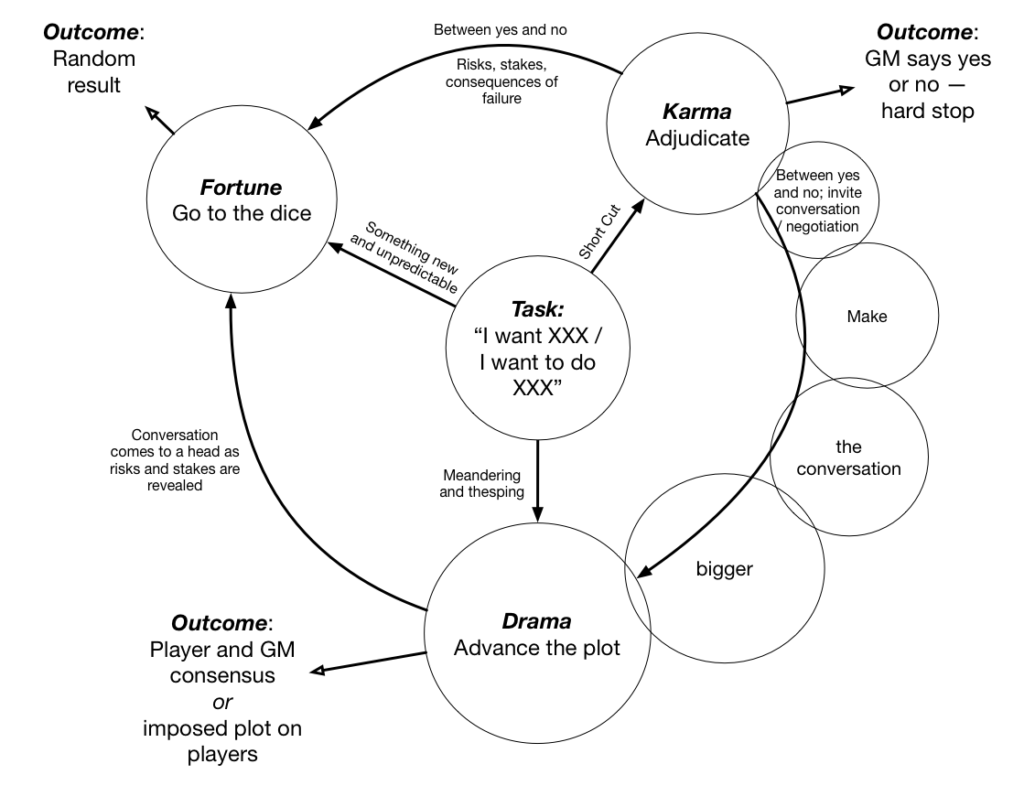 All Tasks start in the middle with a player wanting to achieve something. It may or may not be articulated as simply as “I want”; it could be implied, it may be teased out with conversation, there may be context and conditions. But a combination of Karma, Drama and Fortune can be used to negotiate what the player wants and get to some kind of outcome.

The graphic assumes a couple of things:

This is what the Everway playing guide says about karma on p124:

When applying the law of karma you, as the gamemaster, assess the difficulty of the task, judge the capability of the hero attempting the task, and rule on the result. The hero succeeds if, in your judgement, the hero has the abilities necessary to meet the challenge of the task. The hero fails if, in your judgement, the task is too difficult for the hero’s capabilities.

Going in, karma is a short-cut. If a PC is up to a task then let them have the outcome they’re going for; and if they’re not, don’t waste their time with making them roll dice — especially if the fail outcome is simply “you don’t get the thing” without any other consequence.

This is why karma is often good as an opening position for resolving any task. Drama may be all about what benefits the plot, but karma is in some ways about cutting out what doesn’t benefit the plot and just slows everything down.

If there’s no clear-cut Yes or No what happens next will probably be a bit of negotiation — either prompted by the GM asking how they achieve that, or more detail volunteered by the player. These start to become blow by blow plans, etc. This can go one of two ways: either a lot of back and forth between players and GM (drama) or going to the dice (fortune).

From the Everway playing guide, p126:

When applying the law of drama you, as the gamemaster, the needs of the plot determine the outcome of events. As in a novel or play, events proceed in such a way as to make the plot and story more engaging and enjoyable. The hero succeeds if doing so helps the plot. The hero fails if that helps the plot.

The role of drama is to make sure things happen that are interesting and everyone engaged and invested in the plot.

The problem with drama is… how does the GM judge that to be the case? Occasionally it’s easy, e.g. drama says the PCs must find a clue here to keep things moving. Sometimes, the GM will be working from a script and have prepared set pieces or bangs. Most of the time though the plot will arise from a back-and-forth conversation, etc. And specifically for task resolution, some players love to talk their way through their plans and every step of their actions — a process of exposition that’s dramatic.

So, when does the GM go straight to drama without going through karma first? Usually when there’s an obstacle but it’s not quite clear what the task is — prompting the players to talk around the situation until they get what they want.

To truly resolve by drama one of two things happen: either the players agree how the plot is going forward, or the GM imposes plot on everyone. This isn’t really the same as the GM judging the outcome based on ability, and in general it can feel anticlimactic (either because everything ends in agreement, or because the GM just narrates an ending).

What’s much more likely to happen is that the drama comes to a head and calls for a dice roll, so moves into the realm of fortune. It can do this naturally because all that conversation is setting stakes and bringing everything to a head.

Everway suggests drawing cards for an immediate yes/no judgement, and also for Tarot-like long-term interpretations, and also to improvise results or developments.

You can arrive at fortune from three ways:

I’m going to argue that many times a dice roll is called for the thought process of GM and players have gone through karma and or drama first, setting up the context for the random roll. So the times when people go straight to fortune without thinking about karma/drama is when they’re not really invested in the balance of power or the outcome; they just want something new and interesting to happen that isn’t directly coloured by player or GM invention. Sounds counter-intuitive, but this is exactly what random tables are for, and they work.

The argument above is that karma, drama and fortune form a continuity rather than three separate techniques. I don’t think this is revelatory — more I’ve just said aloud what any good GM with experience has internalised by trial and error. But there are some essential learnings for me at least.

First, always assume the PCs have competence, even if they lack expertise. So if you’re applying the law of karma, assume the PC is judging the situation rather than committing to it. This means that if the task is beyond their abilities they don’t even attempt the task — so they either succeed or they don’t attempt it.

Second, try not to waste people’s time. Don’t roll dice when there’s no real risk. Don’t have players grubbing in the dark for clues when they will inevitably find those clues anyway.

Third, the players will tell you which direction they want to go. This is part of the big drama conversation. The conclusion to that conversation can be one of three things: agree with the players and go with their plot, or disagree and impose your own, or set stakes and go to the dice.

Fourth, do not neglect the power of a random table, card draw or dice roll from a completely neutral position.