Demonbringer is a RPG featuring the demons from Stormbringer 1st Edition by way of the OSR (specifically Whitehack), Everway and the WaRP system.

This is the character sheet I’ve been working on: 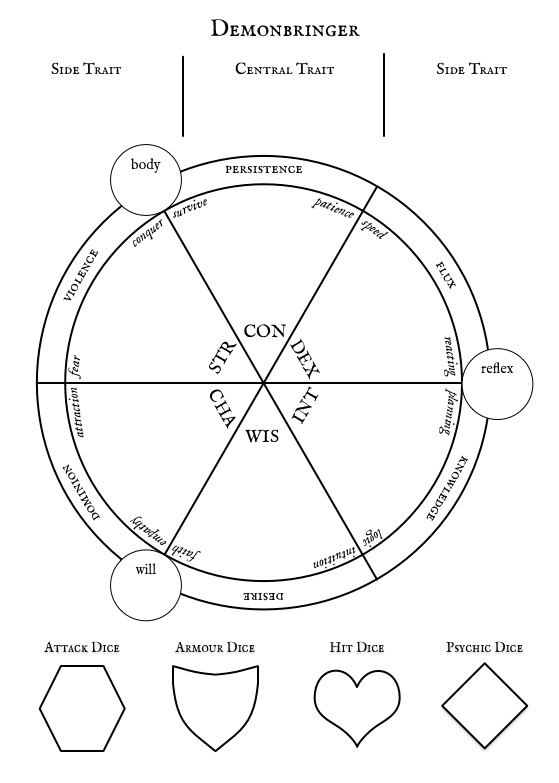 Here is the character sheet as a PDF

It sort of uses a revised roll-under as described here, but that needs playtesting.

But it can be made to use a OSR-like combat subsystem. To do this it uses a dice clock.

It uses Groups or Traits — as applied in Whitehack and WaRP/Over The Edge.

I’ve got two uses in mind. The first is for a fantasy game that’s basically like Stormbringer, in a massive single city. There’s a city-building mechanism or subsystem that both the GM and the players get involved in.

Second is an underlying system for Black Mantle, since the system should work for mecha too.

The two sort of complement each other; one is about having adventures inside a city, while the other is about exploring the unknown outside (or capital-O Outside).

The rest of the text below are some notes I’ve been making on demons. Putting them here by way of elaboration and explanation. This has been written with the fantasy city setting in mind.

1. The Riddle of Demons

The following definitions may be useful:

In addition, demons are described from two perspectives:

First comment: only the actual relationship with the demon is intrinsic; any assumptions of intelligence or motivation, and projections of a personality are extrinsic and colour.

Second, if you don’t bother with relationships with demons, you’ve basically got superheroes (and can run a game with “demons” using an appropriate system).

With a much broader scope any apparent expertise can be called “demonic”. For example: Conan’s obsession with “the riddle of steel” in Conan the Barbarian is a demon; the “service” of that demon is his uncommon ability with a sword, but he also has a relationship with the concept that drives him — and sometimes it gives him hope, other times disappointment.

So in more general terms, players should understand that their PCs’ powers are demons per the game system definition. For the actual game world they (and anyone else in the world) are free to rationalise their powers how they wish.

People have various skills and affiliations expressed as “groups” (see Whitehack) that benefit then in a situation — a Soldier will be combat-ready, a Black Hand Thief will know the nearest escape route, a Scholar from the Imperial Library will be able to tell you of the City’s rich and layered history.

Rare individuals may transcend this expertise — they have superhuman capacity to inflict violence, gain knowledge, withstand pain or cross distances. Such folk have aligned themselves with demons.

The most subtle of such demons are the armaments: these are personal extensions of mortal expertise. These often have a motif — a weapon, a piece of clothing or similar. But whatever happens it’s conjurer to which the demon is bound; thus their motif may be separated from them for a time, but it will always find its way back.

Embodiments are objects or entities that are separate from the conjurer, bound to do their bidding. Embodiments have a form in which they appear; frequently humanoid, sometimes monstrous, or possibly non-living but nevertheless autonymous.

Appeals are short-lived interventions of other beings with whom the conjurer has a relationship. Basically the conjurer opens the way to great and remote powers, which leak through and cause brief but terrible change.