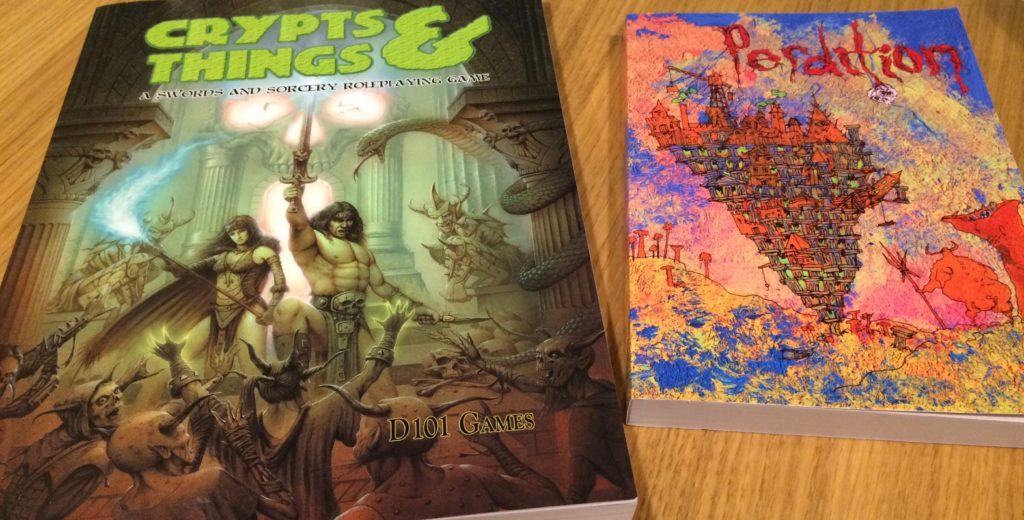 The Black Hack may have all the OSR (and indie) cred right now, but I’ve just been reading two other 2016 OSR releases.

The first is Perdition from Hack and Slash publishing. It’s self-consciously a third wave OSR game:

I said before that the third wave of the OSR will be defined by those who claim it. I also said that these definitions will diverge; and Perdition is clearly diverging from earlier hand-waving claims of simply “innovation of setting”.

The other is Crypts and Things from D101 games, a very British “Sword and Sorcery RPG” with nods to White Dwarf and Fighting Fantasy, and with no elves or dwarves. Speaking of which the Encyclopaedia of SF has this to say about the genre:

Tolkien’s long, richly imagined work is as important to modern sword and sorcery as Howard’s, the two representing the two ends of the genre’s spectrum: Howard all amoral vigour, Tolkien all deeply moral clarity of imagination. (Also, Howard’s heroes were very big, Tolkien’s very small.) Common to both – although the two writers could not have had the remotest influence on each other – is a powerful commitment to the idea of worlds where magic works, and where heroism can be pitted against Evil.

C&T’s influences are Howard, Clark Ashton Smith and Moorcock’s Elric, placing the game at the “amoral vigour” end of the spectrum. I always felt D&D was like that anyway, and perhaps that’s why the fantasy races felt so out of place in BECMI D&D. C&T’s core classes and focus on human cultures feel like a clean but necessary break.

(of course it’s not the only humanocentric Hyborian/Hyperborean S&S OSR game, and North Wind’s Astonishing Swordsmen and Sorcerers of Hyperborea was also a contender for my wallet — but getting the HC of either the 1st or 2nd ed. in Kickstarter would have been punitive to a non-US customer)

Reading through both books reveals interesting differences that point at fundamental design decisions, and I’m going to consider these in a bit. First, the lowdown on each book.

Perdition is about playing in a world (Prime Material Plane) overrun by devils and demons. The latter are Chaotic and would tear creation asunder if it were not for the actions of the former who represent law and stability. They are at war and power their infernal war machine by corrupting human souls. The Vile Court oversees everything.

Perdition’s cover of a weirdly inverted city and a three-quarters view of a corpulent devil’s buttocks is by Matthew Adams, and will look familiar to fans of Yoon Suin. The other artists are Russ Nicholson, Heather Gwinn, Marcin S., and Michael Ralston. Nicholson’s art (a main attraction for me) is mainly found in the Monsters section detailing the major devils or lords. Interior book sections are graced by full-page illustrations, which are anything but traditional and have a spooky, dark fairytale and folk-art feel that would fit in with an occult anthropology book.

I love digest format books; but for once, I wonder if this one shouldn’t have been in a larger format. It’s a dense book and (as indicated by layout issues) there’s not a lot of white space.

(Actually there was some trouble with the PoD for Perdition, where page numbers, flags and some full plates were truncated (vertically and horizontally). This was fixed in my replacement copy (mostly) although the borders of some of Russ Nicholson’s full plates are slightly cut off)

The contents page is great and the order is (mostly) logical. I had no trouble jumping to the sections I wanted to read. The book also provides a “Change Quick Reference List” on page 10 that tells us exactly where the system diverges from the SRD template. The authors know who their audience is.

First, the Character Class and Magic sections — which are effectively player-facing — dominate the book with more than 50% of the page count. There are a lot of options for what you can play, and the game is the AD&D race-plus-class style with over 80 combinations (if you have the right stats). The classes are thoughtfully arranged into four groups based on Tarot suits (although I can’t see much Tarot symbolism elsewhere, but maybe I’m being thick) and the way you like your characters to get things done — fighting, skills, social and magical.

The magic section is extensive and that’s partly because there are many branches, some of which are specifically for certain classes. This means if you want to cast magic you’ve got to absorb both the class options and the magic section to make your decision on what to play. I like the way magic is handled with all the different schools, the Minor/Major/Grand distinctions (as opposed to levels) and the spell surges and so forth. But it’s a significant undertaking for starting players (and taxing if you’ve only got one book between you).

The monsters are the next largest section (and note that there are several fiends in the Summoning and Druidic magic sections also) and the Devil Lords get Russ Nicholson’s lovely art. If the goal is to communicate the setting through rules then I guess class, magic and monsters should be the dominant sections.

But actually the part of the rules I expect the whole game to revolve around is relatively short. The section on dealing with Devils and Demons (including summons, contracts and communication via the Vile Court) is appended to the general rules for equipment and skills and is maybe around 10-12 pages long. This sub-system together with some comments on the Wickedness stat in the Agonarch’s section is possibly the most important in the whole book. That I feel is the game’s real USP.

What else? Experience is treated as Prestige, an in-game currency that is used to claim levels, and also pay for petitions via the Vile Court (an idea I love, as it’s something I have in mind for Black Mantle). There’s a bit on Titan-sized monsters which can be both antagonists and locations (as in Shadow of the Colossus, island fish, etc.). There’s social and mental conflict (and hit points & armour class). The Encounter process causes PCs to suffer stress with successive encounters.

In summary, a lot to like, but also a lot to digest. I expect most OSR games to be nicely modular with a simple core — and Perdition is probably the same, but it’s different enough that you need to absorb it properly — it’s medium rather than low crunch and demands investment to play.

Crypts & Things is much more mainstream in terms of fantasy, though as said above it’s at the Howard and Leiber end of low fantasy as opposed to Tolkien’s high fantasy and great clomping feet. Comparisons with Conan and Hyboria (or Hyperborea) are inevitable — a ruined world besieged by “Others” via a mountaintop gate, pre-human civilisations, and a Barbarian character class.

I thought publishers steered clear of green book covers (when I was putting this image together for Fictoplasm it was a real struggle not to make the image as single wall of blue). Whether that’s true or not the lambent green cover is all you need to tell you that everyone on Zarth is fucked like a chronic case of Martian syphilis. Singing maggots aside it’s a very pretty cover (by David Michael Wright, who also did the interior art) with a male barbarian and female sorcerer squaring off against horned undead, a huge snake and a skull shaped portal in the background. The interior B&W art is consistent and sharp and on the whole very nice if a little safe with a procession of PC in a pose, snake person, ziggurat, snake person, temple, PC in a pose again. The best art (IMHO) is in the monster section (the place where it’s needed most).

The book is your traditional, large format and 2-column layout, plenty of white space. Hardly exciting by modern standards, but — and this is a big plus for me — printer friendly. The content is broken down into books — the Scrolls of Wonder (Player’s Guide) and the Book of Doom (for the GM). The former runs to just over 100 pages:

Then the Book of Doom’s approx 130 pages is divided like this:

The contents page is brief, the index longer but it’s all functional — I certainly wouldn’t have any trouble finding the section I needed.

Let’s say retro-clones diverge in two directions: either greater diversity and choice, mixing and matching racial and class options (the AD&D way) or a reduction in the number of options (the Basic D&D way). Perdition is a great example of the former, while C&T does the latter.

Reducing options means reducing the number of decisions players have to make before kick-off. With four core classes and one homogeneous magic system C&T has a much lower cognitive overhead than Perdition. In fact C&T has an immediacy to it — thanks to the life-paths, the gazeteer and the “What the Elder Told Me” section (eight sets of culturally-biased answers to common questions like “who are we?” and “what is magic?”) I expect it would be quick to get up and running — which matters to me as I’m most likely to run OSR games as casual one-shots.

Downsides? C&T is a bit cartoonish; the classes are templates to be filled in, as is the landscape. That’s not a downside for me — I like my games painted with a broad brush and I don’t care for overly detailed settings. I feel C&T hits a sweet spot with just enough of a sketch to make the world a jumping off point rather than a straightjacket.

What else do I like? I like Skill and I like Luck. I also like the one kind of Sorcerer (as opposed to MU and Cleric) and three colours of magic, each with their own costs. Although based on earlier reviews (e.g. here and here) I had certain expectations and there have clearly been a few changes in the “remastering”. It seems previously White magic cost nothing, Grey cost HP and Black cost Sanity. Now White attracts “Others”, Black gains you Corruption and Grey has no cost.

Let’s talk briefly about Corruption and Sanity. I honestly can’t see the value of having both and in general I can’t see the point of CoC-style Sanity in a fantasy game — it made no sense when it was tacked onto Stormbringer and it’s not a great choice here. Corruption, now that makes sense. If only there had been more than one page devoted to it. The rules seem punitive; if it really goes up for every spell level cast then a 5th level sorcerer could see a bump of 9 points in a day’s adventuring. The rules for other classes being corrupted are hand-waving, as are the ones for reducing. The real problem is this isn’t a currency the players can manage except by not going near Black magic in the first place. A fair strategy and maybe the designer’s intent, but boring.

Crypts & Things is formulaic, safe, evolutionary rather than revolutionary. I’d call that a strength, because the people I play with are only likely to engage with OSR games on a casual basis. The game has just enough flavour. It could be my go-to system for clearing up those LotFP modules cluttering my hard drive.

Perdition is uncompromising, detailed and unique. I don’t think I’d get the time to play it to the depth it deserves. But even so, I’m very glad I read it because it’s remarkable both in concept and execution.

One thought on “RPG First Look: Perdition vs. Crypts & Things”