Here’s what happened when I went to Concrete Cow a couple of weeks ago. I ran StormHack in the morning slot, then played in Matt Sanderson’s Kult 4e game (I believe the KS playtest version, only partially translated into English) followed by Scott Dorward’s Cthulhu Dark session in the evening.

This first part is a sort of designer diary, mostly about things that went wrong. I’ll talk about the other games I played in part 2. 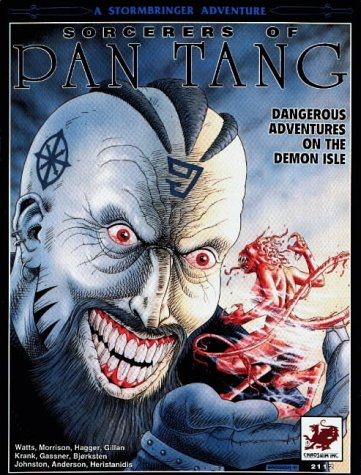 I did a playtest for StormHack. To save time I didn’t write a new scenario but instead grabbed the short and classic See Hwamgaarl and Die from the Sorcerers of Pan Tang supplement from Stormbringer 4th Edition.

I think the scenario went OK (it’s railroady as hell, but works for a fixed-time slot), but on the other hand 75% of the session involved hardly any dice rolling at all. Normally I’m fine with that but it’s hardly a stress test of the system.

The session was too easy. That’s partly a matter of system tuning and scaling but it was mainly caused by three design decisions:

I checked the probabilities of rolling with advantage; it works out that an advantage is the equivalent of a whopping +5 on your attribute. No wonder everyone was winning.

More importantly this asymmetry just didn’t work with the players. It isn’t “trad”, and it certainly isn’t “OSR”. It wasn’t relatable. And that’s the biggest take-away I had: I wanted an OSR game that didn’t deviate too far from the framework, and I’d added these bits that did not do what I set out to do.

See here. These worked OK but for two issues. On the GM side they count down the enemy’s hit points nicely but some players found it difficult to imagine the whole mass of dice as representing several antagonists at once. The idea is that the mass of dice represents the whole threat, and once you’ve knocked out the dice all the antagonists are either dead or fleeing.

But some players need to know how many people they’re fighting, which means how many hit dice per person. This made for a weird kind of double accounting: I had the dice clock down on the table but I still had to translate that into actual numbers of people that they could count down in their heads.

I think this is just a small cognitive hump that needs to be overcome. The other issue was much harder: some players didn’t get the idea of rolling their hit dice on the table, Carcosa style. Whenever dice are rolled the instinct is immediately to snatch them up again (I believe Sorcerer has this problem) rather than let them sit. And the players can be bad at keeping their Hit Dice in play separate from all the other little puddles of dice that are just standing by. And last, when they took hits they looked to the character sheet for a hit point track instead of sacrificing the Hit Dice on the table.

I still think having the GM roll a pool of hit dice for the threat in the middle of the table works as something to focus on. There are things you can do with that (different colours for morale dice, using d8 for demon dice, etc.). But this is a tool to present a heterogeneous body of monsters as a single threat to chew on. You don’t need to do that the other way; each PC is an individual and their character sheet will do fine.

I had some new properties like Heartstrings (after J. Gregory Keyes’ The Waterborn) and Quick. Heartstrings were just Hit Dice and calling them a funny name just confused everyone. As for Quick (a sort of combination of luck/fate points, insight and reflexes) it could work but there was just too much of it as a burnable resource. Besides that stuff normally comes from Ability scores and saving throws. Again, I’d deviated from the OSR plan.

This was the biggest issue. The idea of what demons are wasn’t communicated adequately, for example one player treated their demon as an autonymous NPC whereas it’s really a thrall. The main problem was not enough focus on the relationship between owner and demon (see here) so not enough hard bargaining. In the back of my mind Demons are supposed to work like the Shadow in Wraith the Oblivion, and can be played by others at the table within very tight guidelines. The scenario didn’t test that at all.

Demons were supposedly powered by Quick, i.e. spend a point of Quick to get the demon’s Service. Fine in theory but in practice Quick never ran out (one of the players suggested bidding Ability Score points instead, which would have a lot more bite).

So in summary a lot that didn’t go the way I planned but the upside is, I think it’s all fixable; mostly by going back to the original premise, i.e. remixing the OSR portion to add the demon relationships without too much much clever clever changes to combat etc. that aren’t really needed.

That’s all for now. Part 2 will cover the games I played.