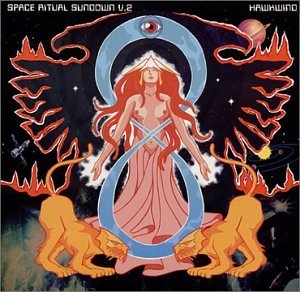 This is my forthcoming Eternal Champion style game for a house con:

The WishTower At The Junction Of Nine Planes

Once in a generation the WishTower intersects all dimensions. The Sorceress who resides within will grant one wish, without reservation, to any Champion who penetrates her inner sanctum. You are that Champion; chosen by your people, groomed from birth with a sword in hand, and send far from home to await the Tower’s reappearance at the very edge of Lawful land, where only rough weeds cling to nightmare cliffs over a roiling lambent sea, and the monuments to past Champions lie shattered and sand-blown, and clouds of ash consume the suns.

Right, so I have a game idea. Now I need pre-gens. What better inspiration than Hawkwind?

Arrival in Utopia (from Choose Your Masques)

Stasis, the World City at the End of Time is technologically brilliant yet artistically stagnant, and spirals towards cosmic insignificance. An avatar, dressed in archaic armour, is sent back in time to seek the source of Chaos and re-ignite the Sun.

We dreamed of golden shining towers // Of lazy days and thrilling hours // Fields of wonder, streets so fair // Of amber ships which sailed, through the air // Dreamed of steel and glass and wire // Of days of wine and nights of fire // Dreamt of dogs that talked like boys // Of girls who flew, of unnamed joys // And now our dreams are true // We don’t know what to do // For we don’t like it here // There’s nothing for us to fear // Bored mindless in Utopia

An ancient sword Qanjana, sworn to protect the mortal society that owns it but desperate to be free to return to its own dimension. Its demon manifests as a drooling, whining albino who carries it aloft in battle; the sword has full use of the albino’s senses and voice box.

With your white arms wrapped around me // And locked in embrace so cold // We slept a thousand years or more // To awake in a land of gold // Where, the king of the world was a creature // Both man and woman and beast // Under landscape boiled with a million strange flowers // And the sun set in the east // And we were heroes you and I // By virtue of age and skill // And we rode to the land at the edge of the skies // To an emerald tower on a hill

A young knight in the service of Queen Antipathe, sworn to protect the Vale from alien invaders. She was not always a knight; once she was a twelve-year old child in a world far away who ventured into a forest alone and was trapped in Antipathe’s dream world, where she was aged magically to young adulthood. Despite her longing for home she has come to love the people of the Vale as much as she hates her mistress.

A weary warrior wearing white plate armour ringed with black grommets to dampen vibrations at different frequencies. He is a veteran of the Sonic Wars, where both sides employ sonic weapons and sonic drugs which resonate key areas of the brain to control sleep and emotion. Their world is a wasteland where the years-old remnants of aural detonations still resonate in unexpected patterns, making any journey outside a soundproofed Dome hazardous. In this world the ultimate act of intimacy is to remove one’s ear pods and listen to another human being.

The warrior’s generals want a weapon to end the war. The warrior craves one thing: silence.

Magnu (from Warrior at the Edge of Time)

They terraformed the Sun! The golden knight rides the solar flares towards the Edge Worlds, bringing the message of the Solar Church to one and all, with a simple message — embrace the New Light, or be incinerated. Now they have travelled further than ever before, with the intention of illuminating the entire universe…

Fable of a Failed Race (from Quark, Strangeness and Charm)

It is heresy to claim that there was ever a world other than this. Sand-blown and sterile where a fat green sun wreathed in flocks of monstrous crows presides over the half-submerged Pyramid Cities. A heretic priest is the last hope of the failing race; they will journey far away to find the source of life and return life to the surface.

Our legends tell we came from a seed // That traveled at a whirlwind speed // Til it came to rest upon this land // That once was green and is now all sand // That buried us up to our eyes // And made us watchers of the skies // Til the shadow wings came for our sight // And left us to conspire with night.