This is a post about Man, Play and Games by Roger Callois.

I haven’t read Huizinga’s Homo Ludens, but Callois mentions his work directly in the first chapter and also challenges his fixation on the competitive nature of games (and I believe the exclusion of gambling. Callois’ theory on play is summarised here).

Note that I haven’t really touched on chapters 3 or 5, which are both good reads but relate more generally to the cultural need for and the sociology of games. I’ve also very much glossed over the second part concerning the interplay of simulation and vertigo (chapter 7) and competition and chance (chapter 8) because the main area I want to consider is the conditional relationship between AGON and MIMICRY.

The Definition of Play / The Classification of Games

Note: the first two chapters are reproduced in the Game Design Reader):

Mimicry is directly (and obviously) applicable to role-playing:

Mimicry. All play presupposes the temporary acceptance, if not of an illusion (indeed this last word means nothing less than beginning a game: in-lusio), then at least of a closed, conventional, and, in certain respects, imaginary universe. Play can consist not only of deploying actions or submitting to one’s fate in an imaginary milieu, but of becoming an illusory character oneself, and of so behaving.

The “closed, conventional, imaginary universe” is I guess the magic circle.

The interesting part of these first two chapters is the interplay between the four categories. One, Agon and Alea represent two ends of a spectrum; at one end is complete mastery and the other is complete surrender to chance.

Agon and alea imply opposite and somewhat complementary attitudes, but they both obey the same law — the creation for the players of conditions of pure equality denied them in real life.

The notion of equality is has always been the subject of hand-wringing with role-players; here it’s not game balance that matters but the ability to engage with the game on equal terms. Also game options may not be balanced, but if the freedom to make choices is there then equality is preserved. This is true if the game is largely random or has some strategic (i.e. skilful, competitive) element.

Two, there’s the interplay of Agon and Mimicry as pageantry accompanying sport:

In fact, bicycle races, boxing or wrestling matches, football, tennis, or polo games are intrinsic spectacles, with costumes, solemn overture, appropriate liturgy, and regulated procedures. In a word, these are dramas whose vicissitudes keep the public breathless, and lead to denouements which exalt some and depress others. The nature of these spectacles remains that of an agon, but their outward aspect is that of an exhibition.

This raises a question: where agon is present in the game, is mimicry always subordinate to it? I am not sure of the answer. But, let’s say you have two schools of RPG thought; one is based on boundaries and the consequences of action/reaction, and the other is based on narrative threads and the need to progress through a narrative arc, at any cost. If mimicry must be subordinate to anon, then the latter must by definition avoid all manner of competitive or strategic play. This leads us to…

as soon as conventions, techniques, and utensils emerge, the first games as such arise with them: e.g. leapfrog, hide and seek, kite-flying, teetotum, sliding, blindman’s buff, and doll-play. At this point the contradictory roads of agon, alea, mimicry, and ilinx begin to bifurcate.

So, to unpack this in terms of our simulationist vs. narrativist argument, any game which purports to “maturity” (ludus) must choose one approach and not the others. It’s easy therefore to see how ideas like exclusionary Gamist (alea) / Narrativist (mimicry) / Simulationist (agon) emerge; and the need for conventions and techniques to steer the players in one direction or another becomes self-fulfilling prophecy.

Note that paidia and ludus are not exclusionary notations but form a continuum of unstructured/informal to structured/formal, and there are examples of both in the four categories, which Callois lays out like this:

Callois places “games of illusion” which might be our immersive, emotional roleplaying towards the unstructured and informal end of the spectrum.

In such an instance MIMICRY coexists perfectly well with AGON. The need to switch between roleplaying and competitive/rules based play is unspoken and in the mode of play I’m familiar with, the timing for the switch is tacitly appreciated by all players. There is no need for fundamentalist declarations of play towards one category or another; rather this mode switching is done on the fly by unspoken agreement.

Thus far from being an immature vs. mature relationship the relationship between PAIDIA and LUDUS is one of tacit vs. explicit knowledge. And with my knowledge management hat on, this leads to a pretty important idea, which is that attempts to formalise roleplaying games into different categories may be doomed to fail, due to the prevalence of the tacit in all learned activity — learned activity being a social construct.

The Corruption of Games

“Corruption of play” has a couple antecedents in roleplaying; the first is the need for immersion or verisimilitude:

Where the problem is to enumerate the characteristics that define the nature of play, it appears to be an activity that is (1) free, (2) separate, (3) uncertain, (4) unproductive, (5) regulated, and (6) fictive, it being understood that the last two characteristics tend to exclude one another. These six purely formal qualities are not clearly related to the various psychological attitudes that govern play. In strongly opposing the world of play to that of reality, and in stressing that play is essentially a side activity, the inference is drawn that any contamination by ordinary life runs the risk of corrupting and destroying its very nature.

Second is the need to remove “cheating”. From this we get all manner of GM advice, contingent rules to stop certain behaviours, etc.

The principle of play has become corrupted. It is now necessary to take precautions against cheats and professional players, a unique product of the contagion of reality. Basically, it is not a perversion of play, but a sidetracking derived from one of the four primary impulses governing play. The situation is not unique. It occurs whenever the specified instinct does not encounter, in an appropriate game, the discipline and refuge that anchor it, or whenever it does not find gratification in the game.

The dilemma is that the player is still playing within the rules as written, but not in the “spirit of the game”.

The cheat is still inside the universe of play. If he violates the rules of the game, he at least pretends to respect them. He tries to influence them. He is dishonest, but hypocritical. He thus, by his attitude, safeguards and proclaims the validity of the conventions he violates, because he is dependent upon others obeying the rules. If he is caught, he is thrown out. The universe of play remains intact.

The third is bleed which is a buzz-word du jour in narrative circles.

Superstition therefore seems to be a perversion, i.e. the application to reality of one of the principles of play, alea, which causes one to expect nothing of himself and leaves all to chance. The corruption of mimicry follows a parallel course. It is produced when simulation is no longer accepted as such, when the one who is disguised believes that his role, travesty, or mask is real. He no longer plays another. Persuaded that he is the other, he behaves as if he were, forgetting his own self. The loss of his real identity is a punishment for his inability to be content with merely playing a strange personality. It is properly called alienation.

There’s not much else to be said about corruption except that it is and will continue to be endemic. But the table at the end of the chapter is interesting:

I wonder if (given its susceptibility for bleed and its otherwise tacit nature) roleplaying is unusually vulnerable to corruption, which is why we get so much contingency built into games.

Chapter 6 covers an expanded theory of games, and starts with six relationships:

Competition-Vertigo and Chance-Mimicry and Forbidden Relationships. This is self-evident — you can’t have a strategic game which at the same time destroys judgement and distorts truth; and you can’t have a game where reality is simulated based on internal logic, but at the same time random. BUT in the latter case you could design a game where one is subordinate to the other, e.g. the randomness creates a set of conditions in the illusion that the players respond to (which is a cornerstone of RPGs).

Last, and most interesting IMHO, are the Contingent Relationships of AGON-MIMICRY and ALEA-ILINX which “may be associated harmlessly.” Callois again goes back to the spectacle:

I have already had occasion to stress that every competition is also a spectacle. It unfolds according to identical rules, and with the same anticipation of the outcome. It requires the presence of an audience which crowds about the ticket windows of the stadium or velodrome just as at those of the theater and cinema. 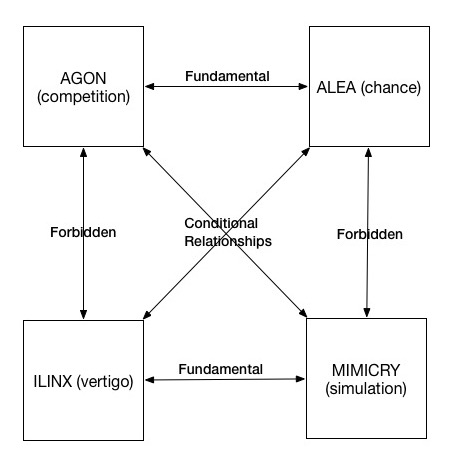 On the Narrativist vs. Challenge (“OSR”) modes of design: logically if you characterise the aim of Narrativist games to induce sensation or vertigo, then this is incompatible with strategic, “challenge based” or “boundary based” design. Of course if we’re using these terms then the use of MIMICRY to denote simulation is going to cause some confusion.

I’ll finish this with a couple of quotes — which are interesting although not specific to roleplaying.

From Chapter 8, concerning Competition and Chance:

The reign of mimicry and ilinx as recognised, honoured, and dominant cultural trends is indeed condemned as soon as the mind arrives at the concept of cosmos, i.e. a stable and orderly universe without miracles or transformations. Such a universe seems the domain of regularity, necessity, and proportion—in a word, a world of number.

From Chapter 9, concerning “The Mask and the Uniform”:

Unsurprisingly other gamers have already done this analysis: this article cleans up the table and covers the six pairs of categories very neatly.

Going further I found this article by Jesper Juul from 2003, which goes beyond Callois’ classifications and argues that RPGs are a borderline case between GAMES-NOT GAMES. This is outside the scope of what I’ve written here but worth reading.

Finally this appears to be someone’s entire thesis which is a bit much for a casual read-through but it includes a nice pictogram of the relationships (which I reproduced above).