I won something! I never win anything.

The thing is the new Traveller Starter Set which I scored in the Concrete Cow raffle: 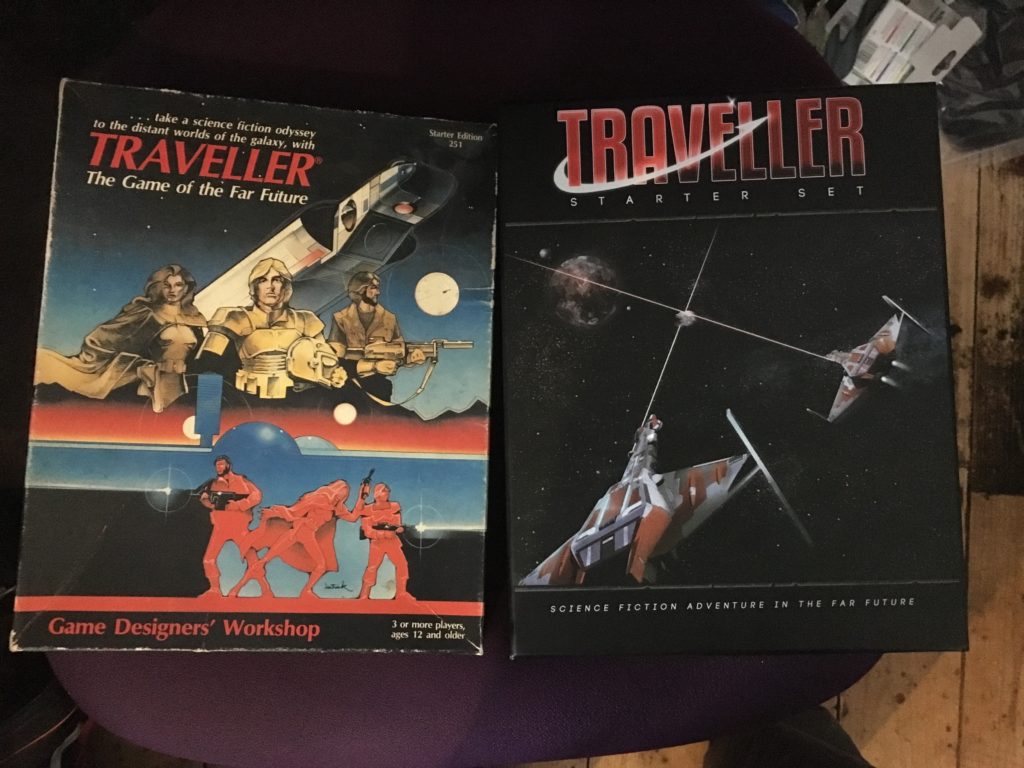 That’s the box side-by-side with my original GDW Traveller Starter Edition. I’ve looked at Mongoose Traveller before and I basically felt if I were inclined to run Trav, I’d use this version. There’s an in-depth review of the core in Reviews from R’lyeh so I’ll just give my first take:

The one thing that annoys me is the pre-gens don’t use a hexadecimal UPP. What’s up with that? Yeah, anyway. I would never have thought to buy this, and now I kinda want to run it. 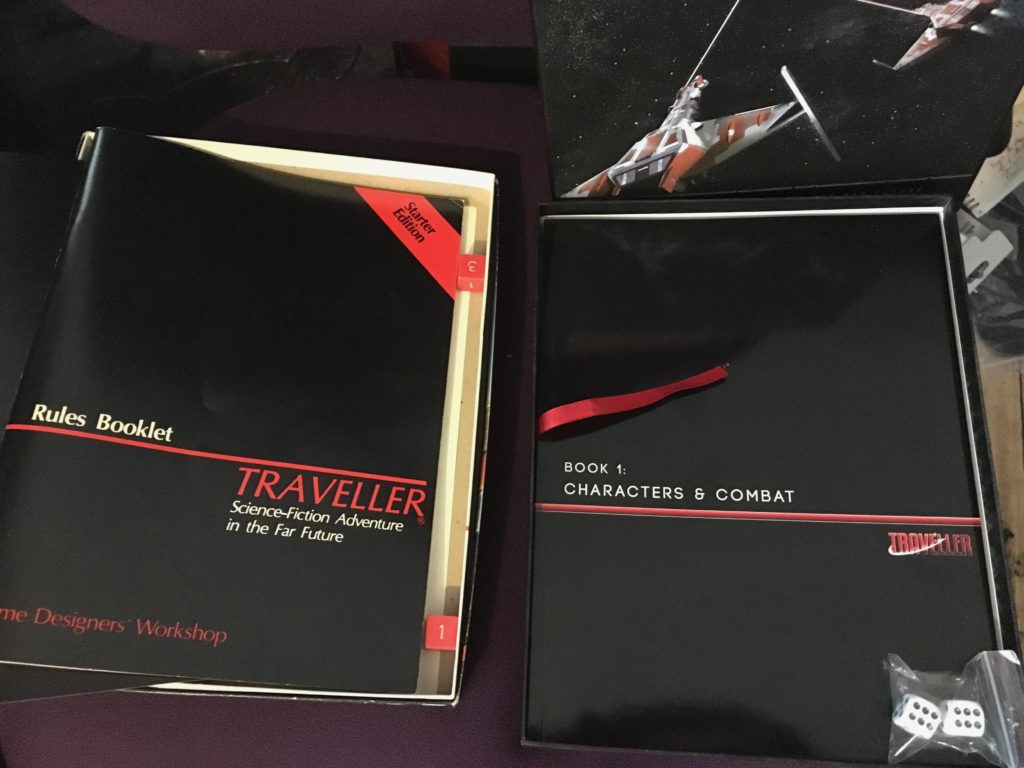 The other bit of loot I got was an upgrade to my All Rolled Up “Nevermore” in the premium Harris Tweed version. Of course when I got it home the other half asked why the hell I went with all-black (“Steggles”) since the point of tweed is to be, well, tweed. Actually it’s got a really nice lining and the texture is gorgeous. It’s authentic cloth, apparently hand-woven for ARU in the Outer Hebrides (and they even have an exclusive pattern woven for them). Seek them out! Buy ARU stuff! (Note that they had a lot more patterns than you can see on the website and you really need to see these in the flesh) 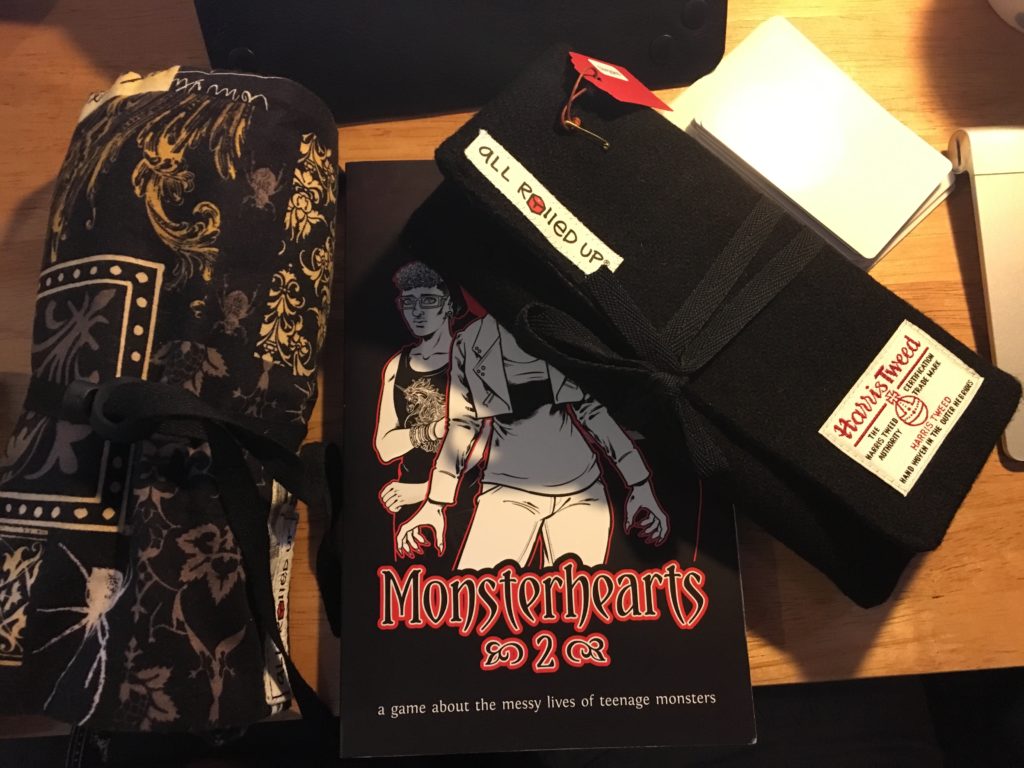 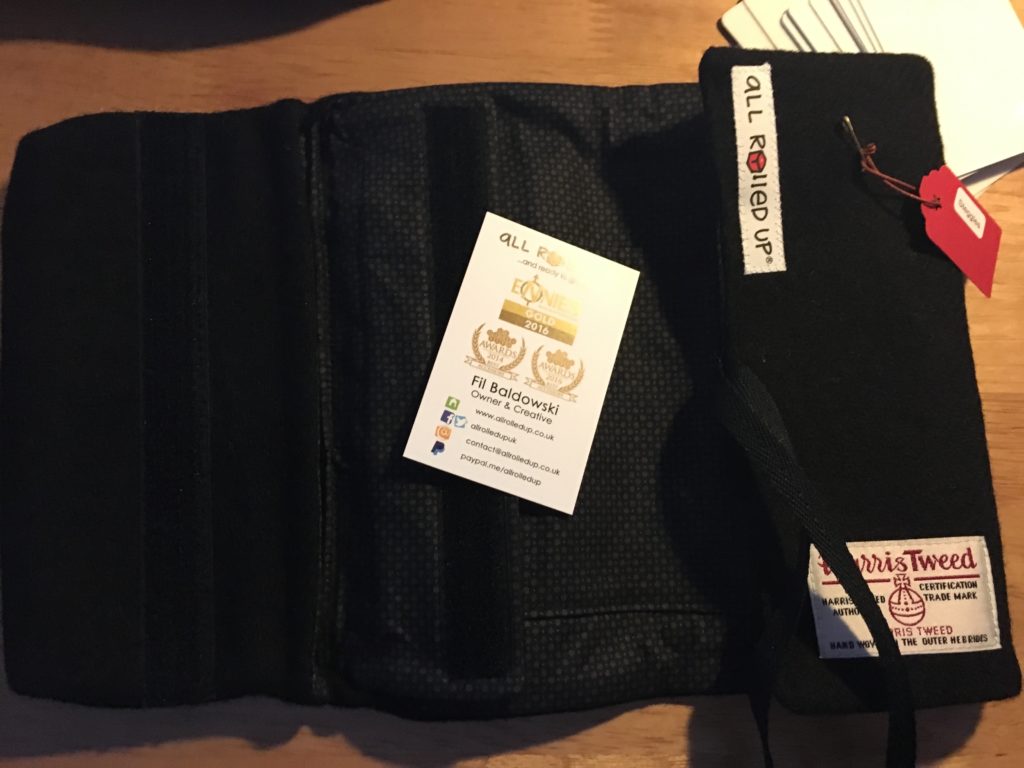 In the morning I played The Cthulhu Hack with the author, Paul Baldowski, who was testing out the new scenario Tainted. These are my brief remarks about the system:

Bottom line, just as Cthulhu Dark is all you really need to run CoC’s straight cosmic horror, The Cthulhu Hack seems a great system for running pulpy CoC with a nod to Trail of Cthulhu. Way easier to get up and running. I think it would probably complement Silent Legions nicely.

In the afternoon I played through my Pale Assassins setting for Monsterhearts 2. To do this I usedI added “skin tattoos” over the top of regular Monsterhearts 2 skins, which is a technique used by Epistolary Richard for his Dark Dungeons game.

The three “tattoos” I used were:

On top of that I had a mapping technique called Depth. The idea is that the Real World (aka the Wasteland) has a Depth of zero, and as you get further into the magical world the Depth increases, kind of like John Crowley’s Little Big. The characters, being not quite real, can’t exist outside Gaelen for too long (just as the townsfolk in The Land of Laughs sicken and die, and Storybrook’s citizens forget their magical nature outside the town in Once Upon A Time). Each of the characters had territory with its own Depth within the magical town.

I made a move for working Territorial Magic:

And there were the Assassins… I had a counting mechanism to herald the approach of the Assassins, the idea being that as the count went down the moves they would take in their pursuit of the Regent would be more extreme and damaging. The Assassins manifested as golems formed of tiny white flowers that don’t grow outside Ruritania.

The session was OK BUT I realised a few things. The first was: don’t gild the lily. Instead of adding layers onto Monsterhearts, work with the mechanics already present.

The second was: PvP games aren’t really my thing, and whilst this setting should work for Monsterhearts, that system doesn’t quite sit for me. So I will probably try this again, but next time using something like Dramasystem (and maybe Malandros).

The third thing was: this really isn’t a one-shot game. One session isn’t enough for a Twin Peaks style slow burn. So maybe I need to pick a system, and then run it for a short campaign.