Among other chores this weekend I’m rolling over to a new bullet journal. I’ve been using this approach for a few years but in 2018 I tried something different: rather than just use the BuJo for tasks, I’d use it for everything, including work meeting minutes, creative RPG ideas, daily tasks and so forth. This was a conscious departure from how I’d done things in the past, namely several notebooks on the go (e.g. one work, one home) plus brief episodes of going completely digital, embracing GTD with multiple lists, and trying to make Filofax work for me. 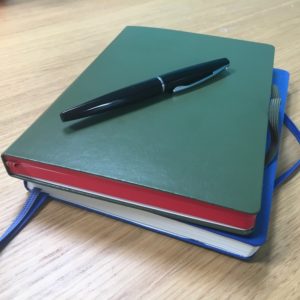 Thanks to my vacillating my last BuJo (one of the official Leuchtturm black embossed ones) lasted more than a year, this one (in blue) has been filled in three months. It’s filled up so quickly because I’m not using the system perhaps in the minimalist way Ryder Carroll does it; instead of a single day taking half a page, my working week might fill up to 20 pages. But while I write a lot more the principles are the same:

Some changes to the BuJo approach, with varying levels of success: 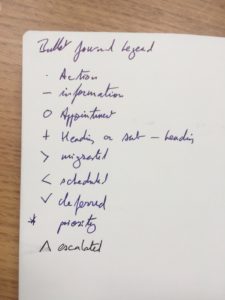 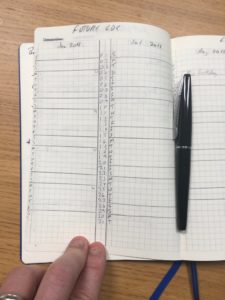 I’m sticking with Leuchtturm1917 journals for now. The outgoing journal was squared paper and unlike Rhodia’s violet 5×5 grid on bright white paper the Leuchtturm square grid is very subtle grey on off-white, and doesn’t make it hard for me to read my words later. The Leuchtturm also has a prompt for Date at the top of each page which is both good and bad — good because I got in the habit of starting a new day on a new page but bad since I write across several pages, so the subsequent ones waste some space. This time I’m going back to a dot grid with one of the special edition Red Dots books which look fantastic — although the index has shrunk down to a 2-page spread which would not be enough if I were not indexing the BuJo way. 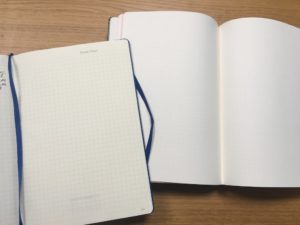 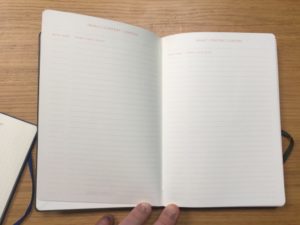 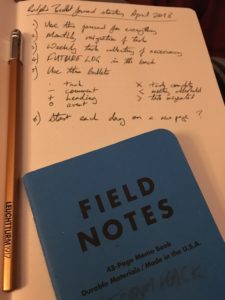 « Bolt On
Beyond the Waves: relics from the last war »