Backers in the Dark

My POD of Blades in the Dark arrived! I finally got around to redeeming the at-cost code sent out to backers (though to be fair it was a year late by the time it was sent, so my interest had waned a fair bit). It’s a great POD — nothing fancy, just right for getting dog-eared and creased at the table. 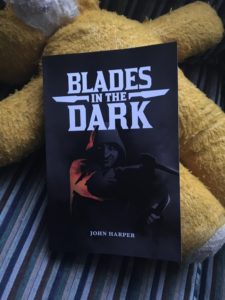 I will now talk about my subjective views on the BitD Kickstarter campaign.

My thoughts are (1) why shouldn’t Harper monetise return favours for work he’s done for other authors, (2) there’s no reason swapping favours shouldn’t be fine these days either as long as Harper remains accountable, (3) maybe annoying but I stopped reading the comments a year ago anyway, (4) yeah, okay… (5) no idea.

I have no doubt that Harper intends to eventually make good, the contributors are quite happy to be doing an unpaid return favour.

I also think that even though BitD has been way off the original delivery estimate (Nov 2015) it’s also been really great value for money with 8 major releases before the final PDF. I ran using version 4 or 5 and it was already excellent. I would like to see the stretch goals realised (especially Jhereg) but I can wait.

But here’s the interesting thing. Half of the focus on the KS is the amount of money pledged — nearly $180k. This has lead to all kinds of comments re: whether or not people should be paid since this is clearly a successful commercial venture. At the same time the other half is around the handshake agreement, quid-pro-quo, barter system that exists between indie designers. I see zero conflict between these two areas but it’s obvious why it’s a source of confusion and tension.

And here’s the other thing: I anticipated this would be the case last year when the partnership with Evil Hat was announced. It was an obvious move from indie into corporate territory (and yes, Evil Hat is a corporate entity — at least, no less of a corporate entity than Chaosium or Pelgrane or other mainstream houses). That in itself didn’t bother me, it’s a natural progression for such a wildly successful campaign and the BitD brand.

The thing that did tick me off at the time was the upselling of the hardcover. From Feb 2017: 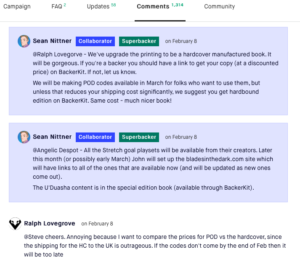 (Sean Nittner, with whom I interacted with more recently here)

Unfortunately I don’t have the “discounted” cost of the printed hardcover, but I do remember shipping costs — $25 dollars to UK. The book itself was probably around the same price. I also got the option to pay for the special edition instead for something like $75 total. Now for the record my POD copy cost me less that £10 delivered. It’s not nearly as nice, but it’s between a third and a fifth of the HC cost.

I’m cool with people trying to upsell and make money. At the same time I resent being upsold when I’ve mentally already set my price, especially with the limited time offer, act now approach.

And the thing is, this is an inevitability where indie designers are brought into contact with corporate entities — KS, Evil Hat, whoever — who will upsell to and exploit their fanbase for every last dollar. That’s not a criticism, even though it sounds like it. It’s exactly what corporations do and should be expected to do. The only difference is the brand and quantity of lubricant they use.