Came in the flood

18 years ago we carried two kittens through a flood in a cardboard box.

Part of a litter of five born to a ginger queen, Cobweb was one of two tortoiseshell kittens. Their faces were a mirror image of the other. I don’t know who took the other kittens; I think the other pair of male-female kittens went to another couple and the last one, a big dopy ginger tom, went to a child. I’m sure they loved their cats every bit as much as we love ours.

Cobweb’s speciality was sitting. She was the main reason for the I Have A Cat rule for tea and booze conveyance. She would sit on laps, on pillows, on chests and backs and heads of sleeping humans, on important documents, on anything that would gather cat fluff.

When I was away in another country my other half would send me pictures of herself with Cobweb on her lap.

She was the rumblecat. Her purr was audible across the room.

And we’ll miss her. 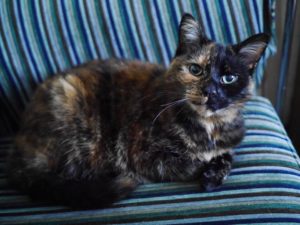 « StormHack A6 and the 8 page method
Backers in the Dark »