I love my fountain pens, but recently I started using my stash of Field Notes for individual RPG projects and since Field Notes have (mostly) terrible paper, a pencil was the way to go. I’ve really liked the results — the little notebook gets creased and scuffed, the pencil gets worn down. It feels like progress. I then discovered I liked using pencils on nicer paper. I trade pencil ghosting for ink smudges and overall it’s a sideways move, but pencils are erasable and resistant to spilled tea.

A couple of weeks ago I spent the weekend in New Jersey, and spent my Saturday walking around NYC looking for RPGs (the Compleat Strategist) and stationery (C.W. Pencils), then drove out on Sunday looking for pizza and more stationery in Chester, NJ (The Pen Thing), which by the way is lovely and green and nowhere near the NJ turnpike and fantastic drive for soaking up Chuck Tingle’s podcast.

At C.W. Pencils I scored some Baron Fig Archer pencils and their Lock limited edition notebook as well as a selection of other US and Japanese pencils: 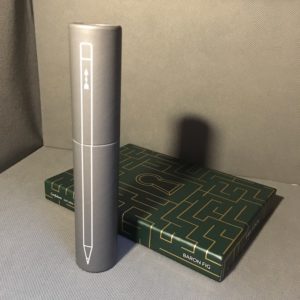 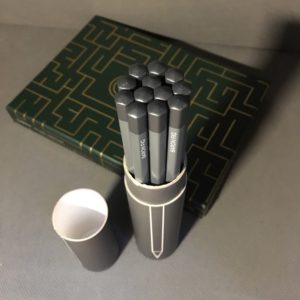 The Archer pencil is fairly thin and light, and it feels an awful lot like the Leuchtturm pencil I’ve been using. Since the Archer is apparently made in Portugal (by Viarco?) perhaps the Leuchtturm is as well. Its dimensions are very similar — no eraser, fairly narrow, light, rounded painted end, silkscreen (as opposed to imprinted) printing.

The ones I really wanted to try are the Mitsubishi 9850 and the General’s Semi-Hex which are basic Japanese and American office/school pencils respectively. General’s is made in Jersey City, and one of only three manufacturers left in the US apparently (I also scored a Musgrave test pencil which is very interesting). 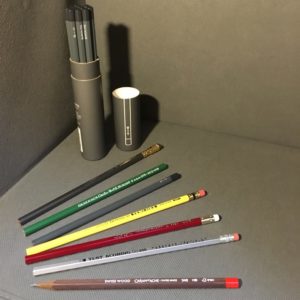 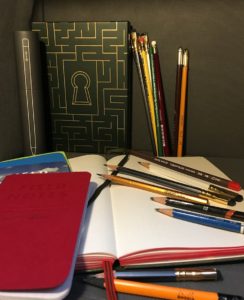 « New shoes
StormHack A6 and the 8 page method »