And now for something completely different, because I can never work on just one project (in fact this is what was bugging me as I was trying to finish the last post).

This is my character sheet for Grand Tableau (a remix of Jonathan Tweet’s Everway using the 36 card Petit Lenormand deck, with elements in common with Amber). 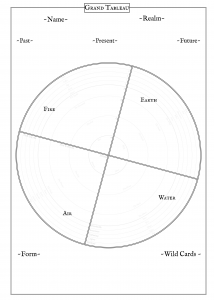 The picture is low res but the vector pdf is here. Haven’t tried printing it yet.

Now, about the deck.

Cosmology and the Fortune Deck

The Gates have a kind of informal hierarchy. No one card is necessarily stronger than another, but they represent a transformation of magical awareness.

As magicians gain strength in each of the suits they will transform according to the level they’ve achieved. At a rating of six they become an attractor, becoming visible to occult agencies. At seven they will start to notice their peers. At eight they will acquire a mark that identifies them to their peers, and may choose to enroll in a College. Nine and ten are very uncommon and usually involve specialisation in the chosen College.

That will do for now. Time for bed.