(and Jennifer, and Hannah, and Vivka)

Zak S posted an official statement — not in the obvious place but on a new dedicated blog. I read it, because… uh, balance. Like, I feel someone accused of something as awful as this deserves to be heard. Maybe that’s foolish of me. Anyway

Assuming good faith, i.e. there was love there, the people speaking out for Zak are real people who are giving a true account, etc.

You can do this and just stop there without picking apart the statement. But since I read it, I have these remarks.

First, Zak’s prose style is a fluid, densely textured sentence layered with information. It’s near-incoherent at times, demanding re-reading to extract full meaning. It looks like a stream of consciousness. That’s a handy tool for mixing statement with emotion, inviting the reader to make mental connections and as a result, sympathise with the author’s experience.

I am deeply suspicious of this writing style in this context.

Second, I would be less suspicious if there was any introspection or attempt to empathise with the damning accounts, something you would hope a smart, self-aware individual who really had loved that person might do. No empathy makes it hard to empathise.

Third, the whole thing is a combination of discrediting the detractors and painting himself as the victim, classic gaslighting.

These are the things that have helped me think about this:

So looking back at my regard for him as a friend and my defending him, and the times that I would look at the evidence of his evil ways people would (very rarely even show) produce and would wonder if it was possible look past one’s bias enough to make it worth the pretense of it.

Often this contemplation of biases would come after (fruitlessly) arguing with him about his bizarre refusal to acknowledge tone in online conversation or countless other shit.

Like .. is this guy actually insane? What would it take to convince me?

Here’s me as chief bullet-catcher; (I still remember how genuinely bad I felt for him because of the lies people were telling about him online.)

Recently, I’ll browse RPGnet or twitter or reddit, or it’ll pop up on my facebook or something, and I’ll see some (edited:) well meaning but imho unhelpful person saying “oh, he was clearly awful, we’ve been saying this for years, you should have known” and it’s horrible. See, deep down I suspect that I did know, and didn’t acknowledge it. Can we have less of that please?

We got fooled. Lots of us. We saw Zak present himself as this cool guy, detatched and intillectual and good at arguing, and he made good books, and he brought you into his web of support.

(emphasis mine on that last line)

Also Mazirian’s Garden, Coins and Scrolls, and Fiona Geist. There are some embedded links if you want/need to read further.

Things that have not convinced me are the mob calling for Zak’s blood (however justified) and the commercial interests that have dropped him (a commercial decision, regardless of the many positive messages condemning harrassment). The problem with all of that is the root cause gets harder to find amongst the noise (see the first paragraph from Scrap Princess above), and there’s just enough doubt to make it look like just another internet spat.

I believe Mandy, Hannah, Jennifer and Vivka. I condemn harassment. I won’t support Zak Smith’s work again. I won’t recommend anything he does to anyone.

But what about the product I’ve already bought? I have a copy of Red and Pleasant Land on my shelf. I’m not going to bin it. I’ll leave it there, untouched, to prick my conscience from time to time.

And I will say again, if anyone I know feels I didn’t listen to them or take their feelings and experiences seriously regarding Zak Smith, I’m sorry.

One other thing I’ve learned: coming back to social media has been a mistake. I’m probably going to unfollow most people so I don’t get tagged into any conversations. Don’t take it personally.

One other, other thing. The comments on Zak Smith and those on Brexit on my twitter feed have bizarrely merged together, e.g. 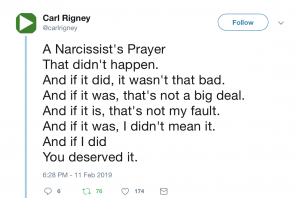 I had to double check which lefty stream this was coming from — I think the one with Cory Doctorow on it.

So, thinking about Brexit. We in the UK have been stirred up by demagogues and so polarised that we’re more likely to identify with Leave/Remain rather than Tory/Labour. We forget who started this, and who we should be angry with; very real people who have manipulated the Leave campaign for personal gain.

The indie gamer’s identity has been similarly polarised between OSR and Storygames. Nuanced discussion has been sorely lacking, on all sides.

I’m not saying Zak S was solely responsible for this split, that would be absurd. What I’m saying is, remember who you’re angry with.

« I believe Mandy
The City Accelerated »