52% of my fellow Britons want to leave the EU. I have no idea what this will mean long term, but the pound is already suffering. I’m sad, because I like being European as well as British.

Here’s a martini made with Spanish gin and French vermouth. Yes, I know it’s early. 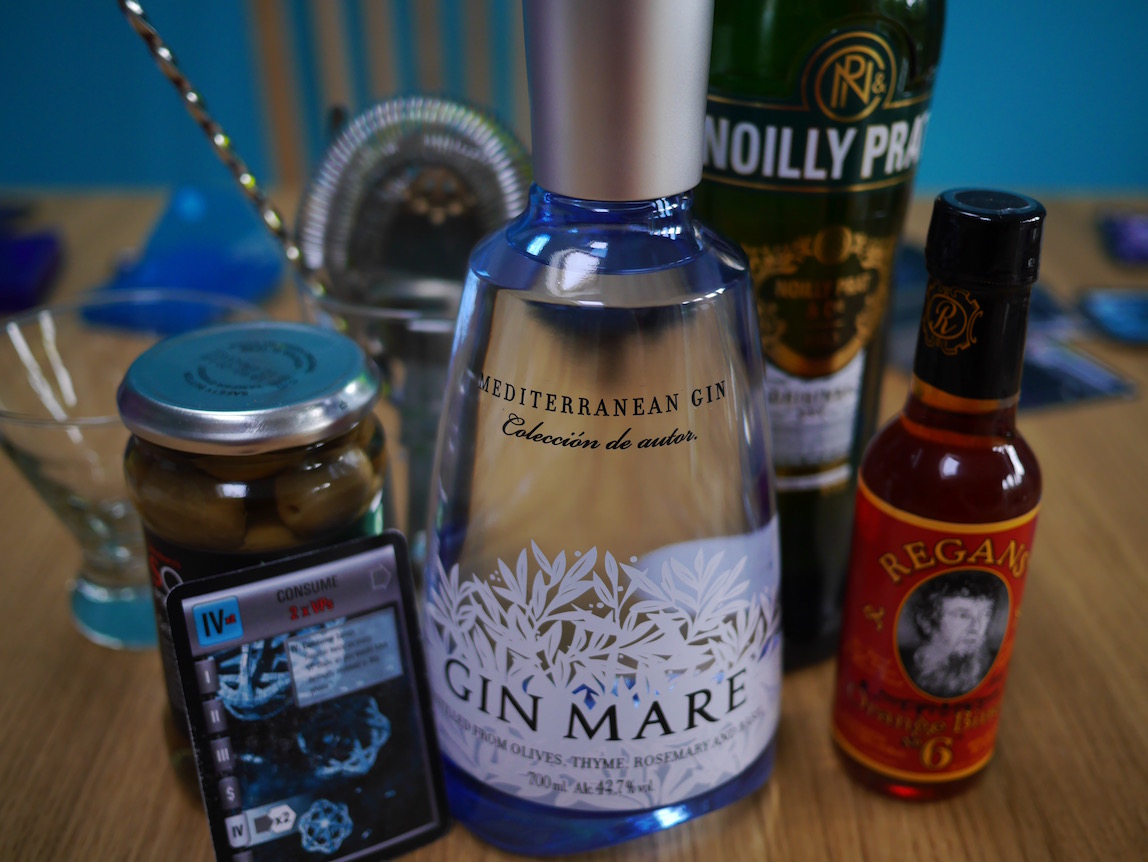 Gin Mare is the gin of choice, a really interesting gin with lots of herbs and no fixatives (orris root, etc.). But that’s OK because it’s not going to last long. Noilly Prat is the vermouth of choice, and it’s great for cooking too. I’m trying Regan’s orange bitters (as an alternative to Fee’s). 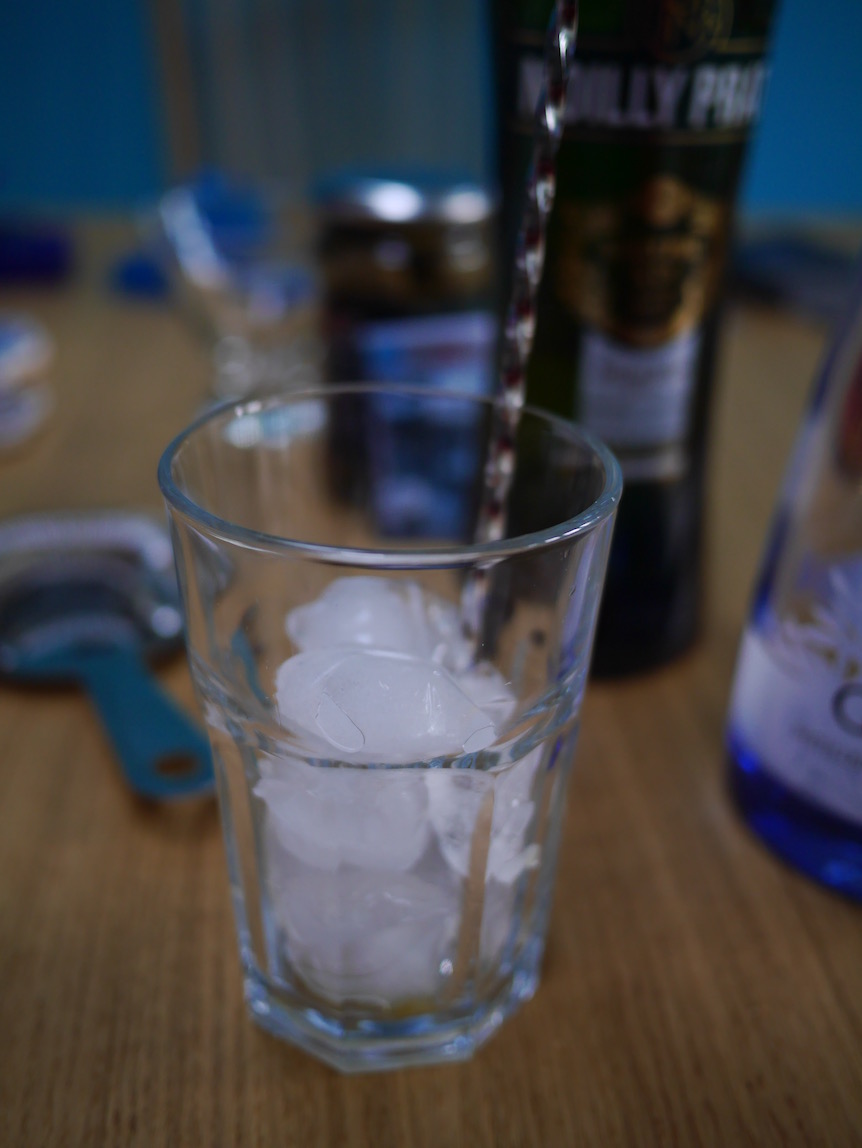 Mix the lot in a mixing glass and stir, then strain into a cocktail glass and garnish. I like green olives. I use a ratio of 3:1 gin to vermouth plus a bar spoon of bitters, which was fashionable around the 1920s. 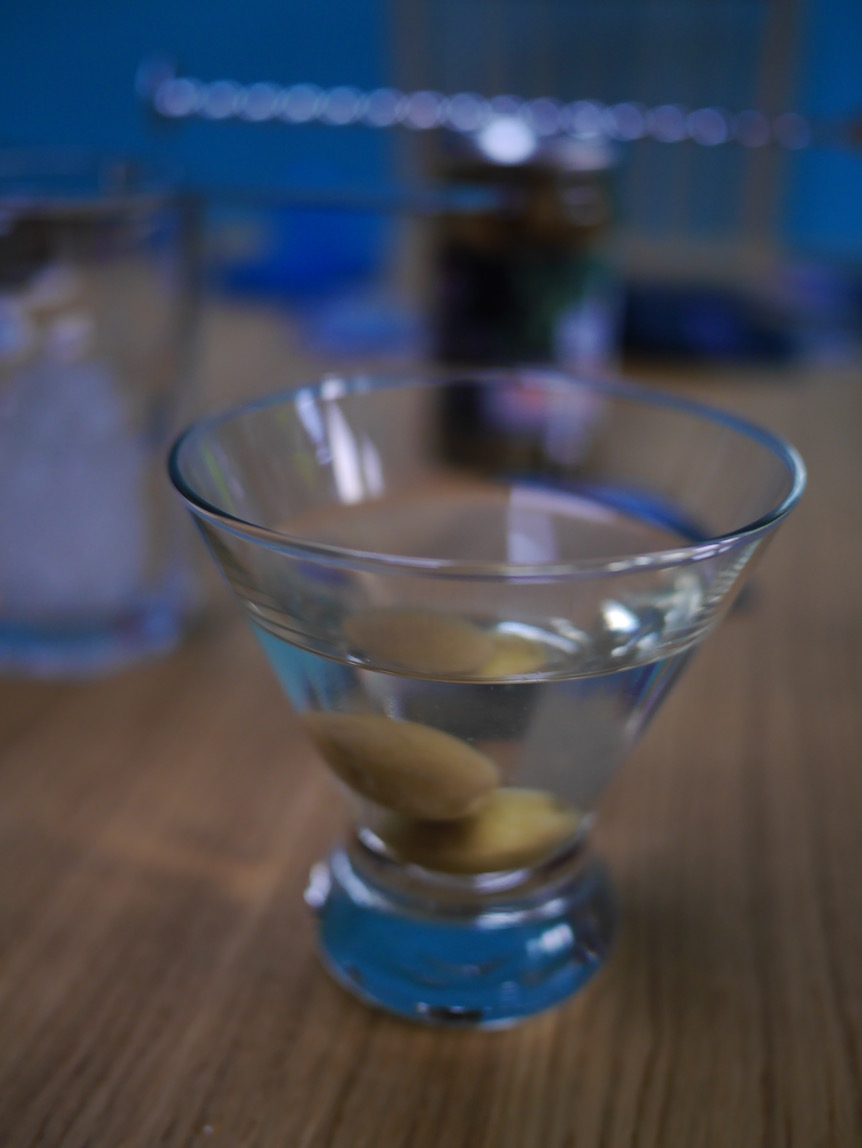 It’s a fairly complex and subtle martini. I think the Gin Mare may be better shaken in a dirty martini, but it’s tasty anyway. The Regan’s is very different from Fee’s, much less citrus and a lot of spice. Probably better suited to savoury cocktails in general, though I’ll keep the Fee’s for my gimlet recipe. Chin chin!

This is the recipe I used for a cheapskate French 75: 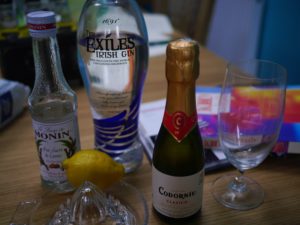 The IBA’s standard recipe is 6:3:1.5 champagne to gin to lemon juice, with a couple of dashes of sugar syrup. Cross’s Classic 1000 Cocktails halves the gin and uses a teaspoon of caster sugar. Ideally the garnish should be a maraschino cherry but I was out of those. 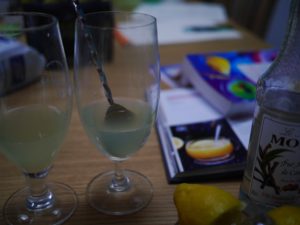 Combine the gin, juice and sugar in a glass and mix with a bar spoon. Then just add ice and top off with sparkling wine and garnish. 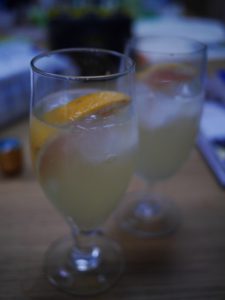 A gimlet is a small, sharp tool for drilling holes, and a gimlet cocktail is similarly short and sharp. According to my favourite cocktail book (Robert Cross’ Classic 1000 Cocktails) the Gimlet emerged in 1930 as a cross between two cocktails, a Gimblet (1 1/2 gin, 1/2 lime juice) and a Gimlet (1:1 msr Plymouth gin and Roses Lime Cordial). The adjusted recipe in the book is

This may be traditional but it’s a crap cocktail. You can do much, much better with fresh lime juice and simple syrup (i.e. make your own cordial). There are more recipes on the wikipedia page here, but my recipe is even better.

Gather your ingredients. Always use a decent gin that you like enough to sip neat — Boodles here works well, but I’d use Bulldog if I had some. Even though there’s a strong citrus flavour, the wrong gin will give a soapy undertone. 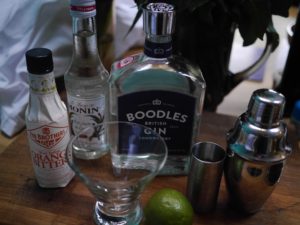 The other ingedients are the juice of a fresh lime, simple syrup, and my special ingredient — orange bitters (Fee’s here).

There are a few ways to serve. An Old Fashioned glass works fine, but a conical martini-style glass is better to smell the fresh lime with the orange and gin aromatics. 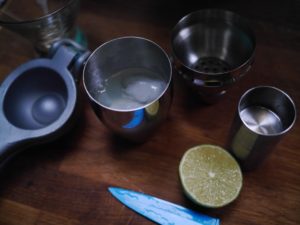 Just combine the gin, juice, syrup and bitters in a cocktail shaker with ice and shake hard. I reckon you want to aerate the cocktail, which will change the mouth feel and aroma. When you pour there should be a little foam on top.

You could scoop out some ice at the end and float it in the drink if you want. Hold the glass by the base. 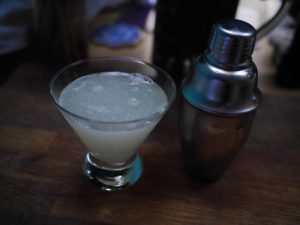 So, as a new parent I can only really have one or two drinks in the evening. Cocktails make it easier to ration alcohol, and I like gin. This is a really nice G&T.

The G&T was a way to make tonic water palatable by adding gin in the early 19th century (if you believe Wikipedia). The question is, were the colonial British consuming a London Dry gin which would have emerged in the later 19th century, or something else like genever, juniper spirit or Old Tom gin?

Wikipedia reckons the gin to tonic ratio can be as low as 1:1, which may have been a reasonable ratio with much more bitter tonic and sweeter Old Tom and a lower alcohol content in the gin. But for a modern G&T and a London Dry gin a 1:1 mix is too much. This isn’t a spirit with a dash of soda — a G&T should be aromatic and refreshing and cold.

The only reason to use a ratio stronger than 1:3 is if you’ve got crap tonic and/or watery gin and just want to taste alcohol. Avoid these both. 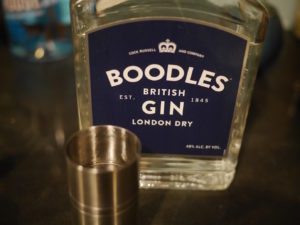 You can get away with something insipid like Bombay Dry or Gordons (that’s modern Gordons, vintage Gordons is apparently a different thing) but there are much better gins for the same money. I used Boodles here which is surprisingly light and delicate, but with a lot of aromatic juniper and coriander that works well in the G&T. Other worthwhile gins are

These three are around £14-16. If you want to spend more money (£25+) there’s Sipsmith or Chase Distillery’s Extra Dry gin. Boodles is right in the middle at £20.

Avoid anything really expensive like Botanist, you won’t get the benefit (sip that one neat). Also anything too floral like Bloom will be wasted because the other scents will overwhelm the gin. 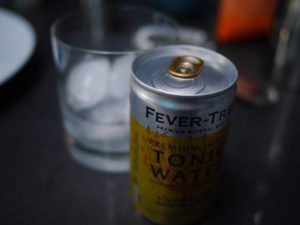 You can use a mediocre gin and make a pretty good drink with decent tonic, but the reverse is not possible. I’m biased because I can’t stand artificial sweeteners, but even so Schweppes has an undeserved reputation (like Bombay Sapphire) and is only acceptable if you’re not taking your G&T orally. These are good tonics: 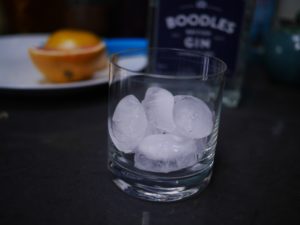 These days people seem to be recommending balloon glasses rather than highballs, but I tend not to use our stemware much because it doesn’t fit easily in the dishwasher and I’m lazy. I’ve used an Old Fashioned glass because I like the way it feels in the hand and you still get a lot of surface area to enjoy the aromas. 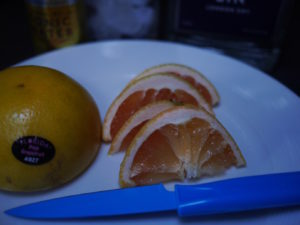 Lime or lemon is classic, and Mango and black pepper is scientifically proven to be the best. I like a big slice of pink grapefruit and I’m also adding black pepper.

Hardly rocket science but you must chill the tonic (obv) and you can also chill the glass with ice, and drain off melt water using a hawthorne strainer (you could even chill the glass using a bar spoon, but that’s hard for me to photograph) 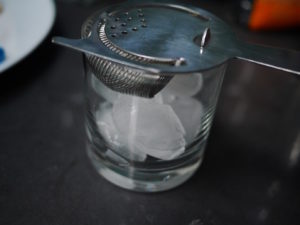 Then add the gin… a 30ml measure will give you a 1:5 ratio with the can of tonic, and still be a fine drink with around 6.5% alcohol and plenty of character if the gin is decent.

If you want to be pretentious you can pour the tonic using a bar spoon as in this video from Bombay Sapphire and this post to minimise loss of bubbles.

Cut a wedge of citrus, run the fruit around the edge of the glass then drop it in the drink. Add pepper over the top. Chin chin! 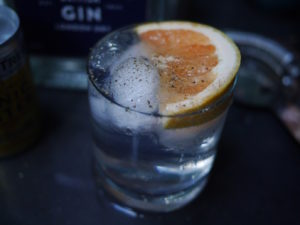 We have gin, we have gin-loving friends — let’s have a gin-off! 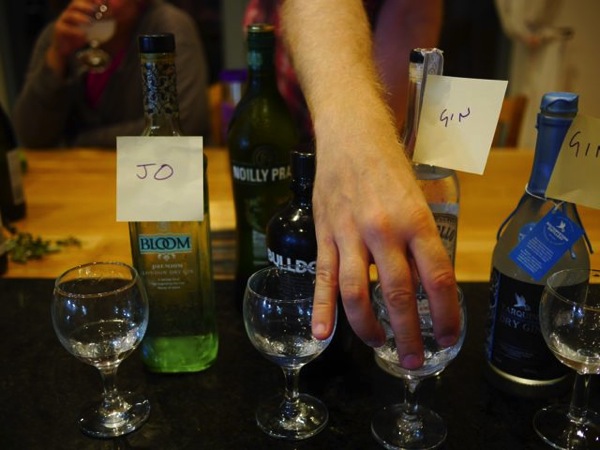 We had four rather nice gins to try:

All of these are described as (London) dry gins, so they’ve been pot distilled with neutral alcohol and have minimal sweetening. There may also be some vapour infusion going on, I don’t know. 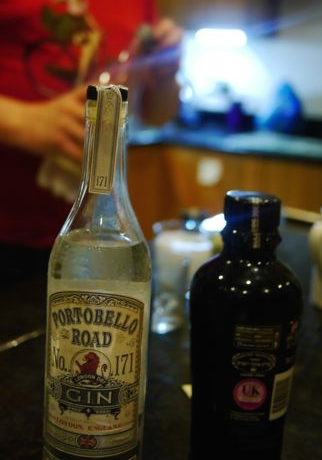 The problem with trying the neat spirit (especially for people who don’t drink vodka) is you get the taste of ethanol and not much else.

Bloom ranked high for most people, with the Portobello Road and Tarquin’s taking a close second and the Bulldog bringing up the rear. However it’s worth noting that two of our five tasters placed Bulldog as their second choice, whereas the other three ranked it bottom. I still think it makes a fine sipping gin thanks to mouth feel and smoothness.

Of our number one isn’t a regular gin drinker, but likes a martini, and she didn’t like the floral character of Bloom or Tarquin’s. Her favourite was the least flowery Portobello.

We later thought the Portobello suffered in the company of the exotic gins. Had we compared it to something a bit more mainstream like Plymouth I reckon it would be a front-runner. It’s a very traditional set of flavours without any attention-grabbing characters, just nicely balanced.

Diluting with water didn’t help the Bulldog’s score, sadly. Tarquin’s knocked Bloom off the top spot with a drop of water, and the other two were just behind.

I know that drinking gin with water is the way true aficionados do it, but for me it’s too middle of the road — I either want the neat spirit or (more often) a nice G&T. Still, diluting it makes it a lot easier to sort the different flavours. I think the chamomile in the Bloom came out particularly well.

After we’d sipped, everyone chose their favourite to go in their drink of choice, and the Bloom bottle ended up with the biggest dent in it. I went for the Portobello in a G&T and I think it was far superior — Bloom and Tarquin’s just gets lost in the tonic if it’s diluted too far.

Our martini lover demanded a martini, and was disappointed by the absence of olives — but a bit of lemon zest worked well. I used the Tarquin’s in the proportions on the back of the Noilly Prat bottle, which is a rather dilute 2:1 (I’m not sure Noel Coward would approve). The result was heavy on the citrus and really quite nice. At some point I should try the Bulldog in the same recipe, it may be just the thing.

Mostly our tasting results indicated preference as opposed to sorting out the flavours. This is what I got:

Bloom has a lot of floral character, and the chamomile comes out well when swilling it over the tongue. Very sweet, not much bitterness or acidity. Good for sipping neat, and apparently goes well with strawberries — someone mentioned a strawberry cup at the 9 Worlds gin tasting, and now Bloom makes their own.

Bulldog is spicy, and not quite as perfumed as the Bloom or Tarquin’s. The perfume is there, but this gin was the middle child in the round up and suffered by comparison with both the aromatic gins and traditional flavours. It’s a good gin, though, for sipping and may fare well in a martini.

Portobello Road is very traditional, juniper is present but not overwhelming and the other flavours combine superbly. My choice for G&T.

Tarquin’s is very fresh tasting, with flavours like pine needles and oranges and less aggressive bitterness. Fantastic gin, made a lovely citrus-based martini, but like the Bloom may be overwhelmed by tonic.

There’s no clear winner, although the Bloom had the biggest dent in it at the end of the night. 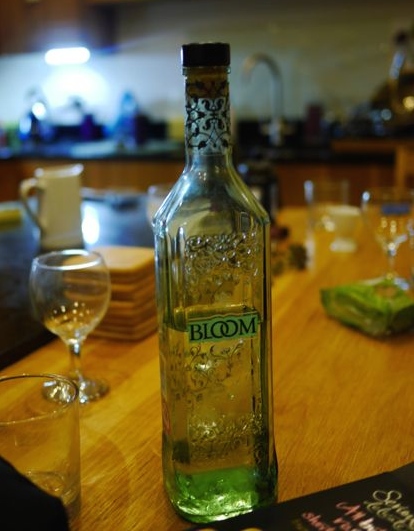 One thing we noticed was how the design of the bottles conveyed the character of the gin — Bloom is delicate, Bulldog is boisterous and Portobello is traditional. Tarquin’s is the least interesting bottle-wise but there is a good picture of a basking shark on the label. I don’t know if that’s a botanical; I know those sharks aren’t particularly aggressive but I’d be pretty pissed off if someone dumped me in a copper still full of ethanol. Perhaps they stun the shark first. 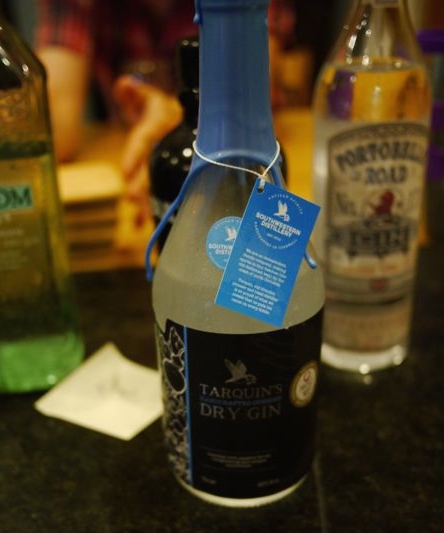