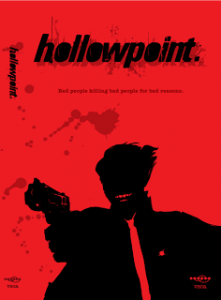 Before I started gushing about Beyond the Wall my best buy of 2013 was Hollowpoint. But now it’s 2015 and honestly, I haven’t been playing it nearly enough. So, while trying to draw up a last-minute scenario for Concrete Cow I started thinking about what makes Hollowpoint work. These are my thoughts in no particular order.

It’s a game about bad people killing bad people for bad reasons, which gave my friends very specific pre-conceptions about what you actually do. It’s easy to think this game is all about high-functioning sociopaths killing everything around them in a sort of ultra-violent Feng Shui, based on the cover. It isn’t. The most important thing about it is each character

What this means is when you have a mission, each and every character should feel they would be able to do the mission solo, if they had the right resources. Of course they don’t, because the mission is just a bit more than any one character can handle. But even though they’re painfully aware that they need to work with others to get the job done, they don’t like it.

In other words each character should have a strong opinion on how the mission gets done. And more to the point, when it comes to players declaring which skill gets used in a conflict, that’s an open declaration of this is my plan and it’s the best plan. At this stage players should not be negotiating on how to tackle the mission together. Asking for help comes later, and has its own mechanics to make the PCs feel uncomfortable.

But in order for each player to have a very clear view of what their character thinks is the right thing to do, they must have a clear view of the mission objective. At this point it’s OK for the characters to negotiate and argue about where they are collectively going to go; those discussions will help focus on the objective. But if the objective is ambiguous, that’s a problem because this isn’t an investigation game of gathering clues, it’s a game of taking action and overcoming obstacles. Of course you can run investigations using the Hollowpoint rules, but that just makes the objective “get this piece of information” and whatever skills the players feel are right get applied to getting that information — stealing, conning, killing, intimidating, seducing.

There’s a debate going on somewhere about whether the mechanic of roll under percentile (as used by BRP, RuneQuest, CoC, etc.) is “disdained”. And on this rare occasion the forum debate is enough to inspire a post…

To clarify roll-under: you get your dice and try to roll equal to or less than your skill. This is compared to roll-and-add where you roll dice, add a modifier and try to hit a target number.

Some of the cited detractions of roll-under percentile are:

I’m not going to talk about bell curves. Bell curves are useful in considering a range of performance over a group of people; applying them to individual skill rolls makes sense if you don’t know who is going to be performing the task (maybe your PC is a gestalt?), otherwise it’s a matter of taste, and less transparent than a linear roll.

The other items are worth considering, because they all represent some kind of cognitive load on the player. This includes the “fix” for the binary pass/fail in d% which I and plenty of other people house rule as

Of course you need to attach meanings to Success, Critical, etc. (and add fails, fumbles). But, as long as the player knows the order of desirable outcome, everything’s fine.

Can d% really be aesthetically pleasing? A pleasing RPG design is going to be one where the player can visualise what they are going to do in the game.

You can overcome the long lists issue by chunking the information. ORE games like Reign do this by clustering skills under headings. RuneQuest 3 did this as well. If you do this you may please your iNtuitive types but the Sensing types would rather have an alphabetical list, thanks.1

There’s one other aesthetic consideration: roll low may give less of a sense of achievement than roll high for a success. I think that’s down to the norms of the group. People learn that they want to roll low fairly quickly.

First, consider the granularity of success; if you apply the fix above to the % roll, you require the player to make some mental division to establish whether they’ve achieved an extraordinary success. A linear die roll with adds makes things easier.

Well, maybe not. On one side you have the effort of division, and on the other side you have the need to keep several factors in working memory. Typically roll and add systems involve adding two or more numbers together before the roll is made (e.g. Unisystem, Interlok), and once you factor in additional bonuses, time to scan the character sheet for the right stats, and the GM’s time to think of a target number, you probably have around the same amount of effort.

It may even be more effort. In a d% system where rolling under 1/5 of the skill is important, that calculation will be done after the roll and only when the player thinks there’s a chance they qualify.

Let’s ignore steps 1 and 2 for now, and assume it’s no more of an effort for the GM to declare “roll $ATTRIBUTE plus $SKILL” than it is to declare “roll SKILL%”. Let’s assume any negotiation step will take the same amount of time (mostly dominated by players arguing if they’re in cover or not, etc.)

Let’s also ignore step 3, and assume it takes the same amount of time for players to scan their sheets and get the information they need to make the test. Not always true when the player needs to retrieve 2 pieces of information vs. just one, but we’ll forget that now.

The real load comes at steps 4 and 5. In step 4, on the left the player has to add several numbers together (easy, but harder with more numbers). On the right, the player has to divide (harder), but not always; when they do roll, it’s because they’re motivated to make the calculation because they might get a better result out of it.

OK, what about the load on the GM? On the right, the GM has to contend with a limited number of outcomes (“Fail”, “Success”, “Critical”) and the meanings of those outcomes will be established in the norms of the group and in the rules.

On the right, the GM has to go through an interpretive step (comparing how much better the player rolled than the number the GM has in her head; is it one point better, 3 points better, etc.). That’s a load of arithmetic you’ve heaped on the GM. The only way the GM can get away from this burden is to accept a binary pass/fail as the only outcome, something which d% is criticised for.

Arguably the d% system presents less of a burden than additive systems, even simple ones. Why then do some people react badly to d%? I propose that the strength of d% is exactly the reason some people can’t stand it: some players don’t want to know how likely an outcome is. If there’s only a 30% chance of success, why make the attempt? But if there’s an unknown but slender chance, choosing to blindly roll is seen as heroic, rather than tactical. Furthermore the promise of some open-ended rolling is alluring and optimistic, whereas the chance of rolling 5% or less is pessimistic.

So that’s it, then. This isn’t to do with cognitive load at all, it all swings back to aesthetics. Gamers who hate d% are incurable optimists and fantasists, wilfully ignoring realities and probabilities, and gamers who embrace d% are realists and pessimists. It would explain why d% works so well for Cthulhu. 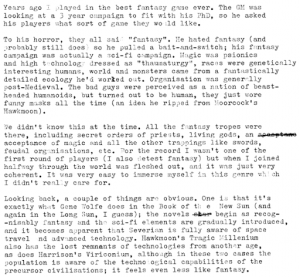 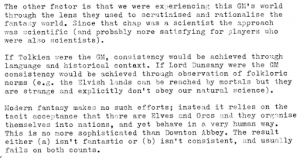 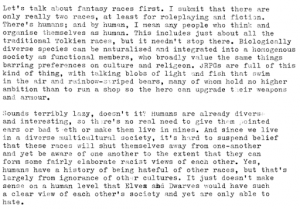 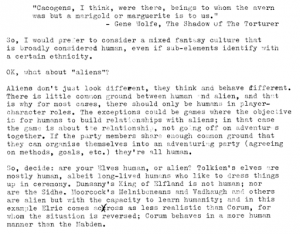 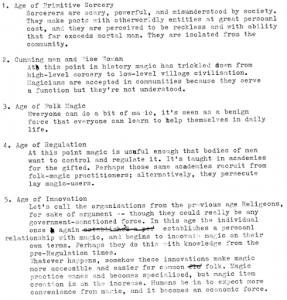 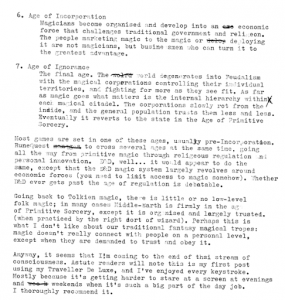 A brief nod to the fantastically useful Troll, a dice roller and probability calculator. I used it to estimate the probabilities of rolling matches in Hollowpoint or a similar D6 mechanic. Brief summary in a not-very-pretty table:

p>Interesting outcomes there. If you want to have a system where PCs get more than 1 set per round the sweet spot is a pool of around 6 dice. If triples are significant then they start to appear around the same time; and if quads are significant, you get one about 1 time in 20 for a 6d pool, but they stay relatively unlikely up to 10d.

The thing about Hollowpoint is that burning a trait automatically bumps up the threshold by 2 dice, but the probabilities just shift 2 columns to the right. Also for info, Hollowpoint base dice pools are 1 to 6. To be continued.

The Tears of Envy blog has a project on called Cyberpunk 1984 (not Orwell, but the year Neuromancer was published) capturing Cyberpunk as an artistic movement.

Cyberpunk has been and gone. The successor to cyberpunk is–what? Transhumanism, I suppose, given the promise of GURPS Transhuman Space and Eclipse Phase. 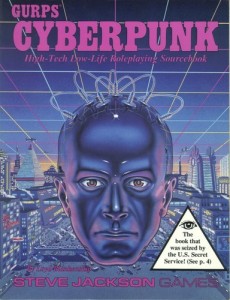 GURPS is all about the cross-genre toolkit, of course; so it’s not surprising that the Cross-Genre Cyberpunk sidebar in GURPS Cyberpunk (1990) mentions GURPS Space, with this rather prescient statement:

“The big thing to remember about far-future cyberpunk is that it will be truly ultra-tech.  The mind and body changes available to a 23rd-century Solid Citizen would probably amaze, disgust and frighten that 2050 netrunner!”

The first edition of the Cyberpunk rpg is set in 2013. The future is here, with chrome, shoulderpads and big hair.

Interface Zero is purported to be an updated Cyberpunk for our wireless, overlayed augmented reality HUD world. From what I know of IZ it appears to embrace transhumanism as well as updating technology to include wireless communication, etc.

But what if that’s not what I want? What if I want to run a truly anachronistic CP2013 (or 2020) game? Something that harkens back to the unbelievably dated 80s premise, big hair and corporate greed and all? That would require quite a suspension of disbelief. Off the top of my head a few features of a “Gibson Continuum” are:

1. Always plugged in. There is no wireless in the Gibson Continuum. Manual emergency disconnects from a cyberdeck before black ICE hits may result in physical damage to the cranial sockets. It’s going to be a PITA for Solos with smartlinks to their weapons, too–they’re likely to snag that flying lead on every doorknob and coat hook. Unless it’s 2013 and there are no more coat racks, punk. 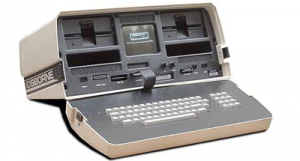 8. Literal mapping in Cyberspace where nodes correspond to virtual 3D space–so if you want to shop online, you need to enter the virtual store and go to the correct shelf for your goods. 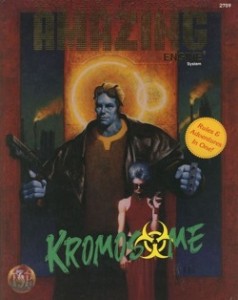 9. Relative ease of living “off the grid”; satellite imaging is behind our current tech, personal GPS doesn’t exist.

That’s all for now. The list will grow and be refined–especially after mining the visual media list for inspiration.

A brief list of media for visual style cues. Most of these come from the GURPS:CP list, though a couple (Until the End of the World, Wild Palms) post-date the book.

Until The End Of The World

Overdrawn at the Memory Bank

Notes Towards a Post-Cyberpunk Manifesto (Slashdot; linked from the Tears of Envy blog post)

Eutopia (sic) is Scary (uses the same quotation I used above from GURPS Cyberpunk) and the (maybe a bit more relevant) follow up essay, Why is the future so absurd?

Two mentions of The Gibson Continuum: this blog post and this Science Fiction Studies essay by Thomas A. Bredehoft